Last weekend I flew to Munich to visit my girlfriend, who is out there studying as a part of the Erasmus scheme. Munich is a stunning city and I got to see many of the sights it had to offer.

One of the places that we visited was the city centre in Munich, Marienplatz, where you can find the infamous Rathaus-Glockenspiel. The tower of this building contains a clock with figures that act scenes from a jousting tournament at a certain time each day. The architecture of the building itself is gothic styled and it’s an all-round impressive building to look at, especially with the addition of the huge Christmas tree that was being placed in front of it whilst I was there.

I additionally looked around the Olympic village from the 1972 games. As a fan of sport, I was very eager to see the main stadium, which was epic in size and stature. The village itself is very picturesque, featuring lots of greenery and rolling hills; I later learnt that the landscape was built upon the rubble left behind after the bombings of the Second World War. 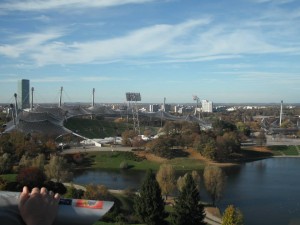 The Olympic tower is one of the most iconic buildings in the park. It contains a revolving restaurant at the top, which serves a sunset menu at 6pm. We jumped at the opportunity to eat there, even if it was rather expensive. At a height of 291.28 metres, you get a fantastic view of the whole of Munich and, as it rotates, you get a full view of the city whilst enjoying a gourmet meal! It really a fantastic experience and was defiantly the nicest restaurant that I have ever eaten at. 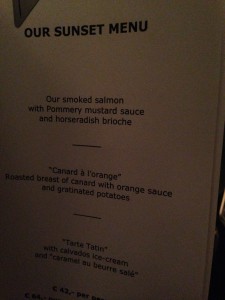 What we had to eat

There was one other place that we visited, but I have decided that it deserves a post of its own, so watch this space…