As I mentioned in my previous blog, this year I went on the Christmas Ski trip to Val Thorens! Having just returned I thought I would let you all know what I got up to whilst I was out there.

First of all there was a grueling 20 hour couch journey to get to the French Alps. Now this may sound horrific, but fortunately it was largely overnight so I was able to sleep for a large proportion of it due to being tired, however that doesn’t mean it was a comfortable journey, but it was defiantly worth it.

We arrived on the Saturday afternoon, a little too late to go skiing unfortunately but it gave us time to get our bearings and cook dinner in our 4* (which is an often unheard of rating for a ski trip hotel) apartments. Every night has a fancy dress theme which is organised by the LUSSC (Leicester University Ski and Snowboard Club) and the first night was a Christmas theme, so we decided to put on our Christmas jumpers and head out to the bars of Val Thorens, none of which are cheap at all, so budgeting is important unless you want to spend a small fortune.

We were up at the crack of dawn on the second day to beat the queues at the ski rental store, which definitely paid off as we were on the slopes for 9am as they opened. Admittedly the snow wasn’t as great as my previous ski trip, but at least we had snow, and the vast majority of slopes were open; unlike the vast majority of other resorts across the Alps. The Skiing in Val Thorens is varied so much, there are plenty of long green and blue runs that are great to learn the basics and perfect techniques. But there are also plenty of moguls and challenging red and black runs to really push yourself. 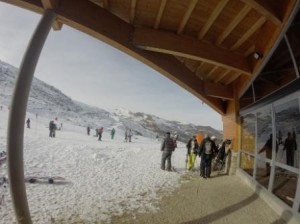 At the end of  the ski day La Folie Douce comes alive with many skiers and boarders all coercing here. Its like a club on the slopes with a live DJ, Singer and Saxophone player, and it all outdoors in the snow! The atmosphere here is always fantastic and a great way to end the day of skiing.

We decided to go out every night, which by the end of the week began to take its toll on all of us. There is no obligation to go on the nights out at all, so don’t let that put you off going if you are thinking about it, there are plenty of people that just go for the skiing/boarding. It’s a fantastic experience to be a part of and it’s at a ridiculously low price that you will never get the opportunity to have once you have finished University. There are heavily subsidised lessons that are available too, so even if you have never been before I highly recommend going on the trip at least once throughout your life at Leicester. 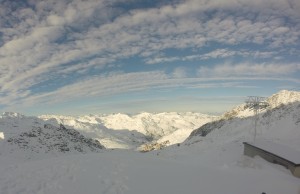 Speak to you all soon!