A few weeks ago now, after my last exam, I was just finishing Quidditch training when I overheard someone mention something about a tea cup in Worcester. If you’ve seen my last blog or bio, you will know that I live in that strange-sounding and un-sayable for many Americans, city. Being nosey, I asked what she was talking about and found out that it was the Tea Cup Quidditch tournament which I had never heard of and it was taking place just up the road from home.

Unfortunately, the signup date was already passed and none of the Leicester team were going but seeing as it was right on my doorstep, I really wanted to go, and thought I would enquire about snitching.

In Harry Potter the snitch is a small flying ball which the seekers try to catch in order to gain 150 points which usually wins the game. Since us muggles don’t have access to any flying snitches we have to improvise and someone impartial runs round with a yellow football sock containing a tennis ball hanging out of their shorts which must be grabbed for the team to win. In the past, the snitch carrier was allowed anywhere and could do almost anything to escape the seekers. This meant that they could be seen up trees or scaling walls, with water balloons or disguise. More recently though, because Quidditch, perhaps deservingly, wasn’t being taken seriously by the sporting world, the snitch now must remain on pitch. (and there is even talk of changing the name in an attempt to make the game less Harry Potter related; name suggestions in the comments section please!)

So after speaking to the tournament director, Luke, I was to be the snitch for the Tea Cup. The first day, which I couldn’t go to, was a training day for the teams to get to know each other, and the people who hadn’t played before to learnt the rules. On the second day each of the three teams played each other twice, with the referees coming from the third team. I snitched all six games and by the end of it I was knackered. Quidditch is full contact but you have to keep one hand on the broom. As snitch you use both hands to shove, tackle and run away from both teams’ seekers.

The day ended with two wins for each team – a three way tie. When this happens in Quidditch, the order is decided by the score or quaffle point difference (QPD) followed by number of snitch catches etc. until the winner is found. However, at the cup presentation the Tournament director, Luke, spoke about how the teams were very even and so he called it draw until next year’s Tea Cup II which he promised would be bigger and better with the addition of a festival on the Saturday. Luke went on to say the cup needed to be given to someone and as someone who had played all 6 games, (and technically lost every game because the snitch always gets caught eventually) I was given the Tea Cup and proclaimed winner. So there it is folks – how to win a Quidditch Tournament! 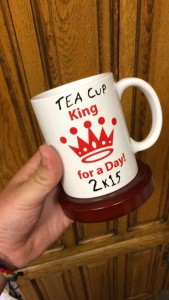 Please leave your comments below, I’d be glad to answer any questions.