Posted by Ben N in Engineering on September 8, 2015

My cousin, Jess, came up with me to see the house I’ll be living in for the next academic year yesterday.

Jess has just finished her final year at Birmingham and it was invaluable having her there as she’d already been though all the usual challenges of being in a rented student house for the last two years at uni. This blog is just going to be my first thoughts about the house and later in the week I’m planning to do one with some tips from Jess and what I’ve learned in case you’re moving up yourself sometime soon.

She seemed pretty impressed with our house which cost 1 pound per week less than hers (seems not very much but for 5 of us for a year its £250!) and when I saw hers it seemed smaller, darker and had some dampness issues.

That’s not to say ours won’t and doesn’t already have its own problems. We’ve already had a bit of an issue with the window which has turned into a bit of a learning curve for us about sales people. I remember back in April when we first looked around the house, full of hope and probably slightly over keen, after the house we had hoped to rent fell through.  It seemed pretty nice but there were a few problems including the fact that many of the double glazed windows were cloudy. I already knew that was result of water getting between the two layers of glass, and as well as the aesthetics of your window being permanently foggy, it can mean the window doesn’t have the insulating or soundproofing properties of normal double glazed window. I asked the (lovely) man showing us round about the windows and he assured us that although he couldn’t 100% guarantee it, he couldn’t see any reason why the windows couldn’t be replaced as soon as the previous tenants moved out. When we saw him again to sign the papers just a few days later he was much more formal and business like, quite unlike the laid back and friendly man who had showed us round.

When I went to collect my key yesterday however I was told by the same (and still formal and business like) man that they had had all sorts of trouble with the window replacement due to the fact the window frames were wooden!  For some reason his friendly alter ego hadn’t realised this at the time of making the promises. And the windows weren’t the only thing; if you’re looking for a house, keep an eye out for problems that ‘should’ or ‘almost certainly’ be fixed by the time your contract starts. I think it would be interesting to see how many actually get done – because many of ours weren’t.

Other unexpected surprises that we only found on the day included, a stinky washing machine, a bathroom doorknob which came off in your hand and an unflushed present left in the toilet! 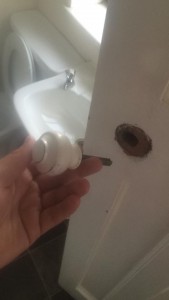 To their credit though, the house was mostly in great condition, painted and cleaned nicely which was great.  There were also a load of photos for us to sign as a record of the condition it was in when we took over which did acknowledge most of the bad bits.  We took a couple of extra ones just as insurance!!

I just can’t wait to move in now- even looking forward to doing a bit of work to the (3 month overgrown) garden.

Let me know how you’re feeling about moving to Leicester, and I’d love to hear any funny stories about your new house or hall.