How to Move in to Your Second Year Student House

As promised in my last blog, here is my guide of the main things that I would advise anyone moving into a student house:

Hope some of that helped! I’m hoping to do a blog on what life is like in a student house in Leicester once everyone has settled in to our house.

One of my house mates has been saying for a while how he would like a pet for the house (which our contract says we aren’t aloud) and on Tuesday we found this chap! 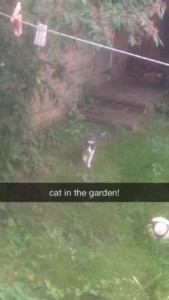 While it’s in our garden we’ve called him/her Pixel.  Please comment if you know how to tell the sex of a cat!