Posted by Ben N in Engineering on December 8, 2015

Hope you are all well! I was thinking about doing a Christmas blog this week to talk about all the seasonal events at uni but Lauren has already done a great post on that.

Instead, I’m doing the top 5 interesting things on campus generally. These things are great for showing your friends and family if they come up to collect you for the holidays and they haven’t seen the campus yet.

So without further ado, here are my top 5 cool things you might not have ever known about the University of Leicester’s campus.

Jane lives down the corridor as you go in on the left of the Bennett Building and is the remains of a Tyrannosaurus Rex, the largest of meat eating dinosaurs. It’s only a baby and would have doubled in size but it’s still way taller than 6 foot 3 me and is sort of mini bus length. Although Jane was discovered by the University, it was a joint effort with an American team and because it was found in the US it has stayed there. Jane is a cast of the real thing bus she certainly looks realistic enough. There are a number of actual dinosaur eggs and bones there to look at too, so well worth a look! 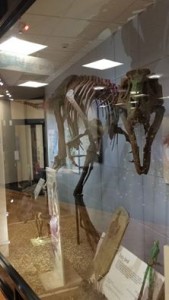 If you do go and visit Jane, you will most likely pass the Rattray. On the side of the Rattray is a weird and wonderful astronomical clock that tells you the current position of the sun, mood and starts as if the world was the centre of the universe like they believed in the medieval times. The clock looks like something from a sci-fi, and apart from the normal time and the position of things in space, it tells you the solar time, daylight length, and the moon cycle. No one I know can read this clock but it’s fun to look at your watch before you get to it declare to whoever’s with you with what the time is, and make up some nonsense about how Pluto and Saturn aligning tonight and how it’s going to snow in Tewkesbury on Wednesday. 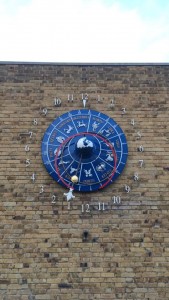 In the entrance to the George Porter Building, there is a large periodic table on the wall. This periodic table is unusual because each box is actually a clear cube with a sample of that element inside. Some of the elements really are beautiful. However quite a few of them are colourless gasses so you do have to take their word they’re in there! 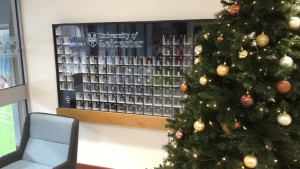 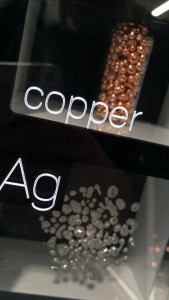 The physics department insides are way better than in engineering, I’ll happily admit. Where we have wooden pew like lecture benches, they have cushioned seats. They also have a common room with a bit of a kitchen, a photo signed by Buzz Aldrin and in the foyer and they also have a space rocket. It’s just in front of you if you go through the far doors, and it stretches across two floors. This rocket launched in 1961 which means Leicester beat China into space! This time of year the rocket is covered in tinsel which I’m sure wasn’t on it during the flight or there would be some serious drag. If you’re interested, there’s a sign with loads of info about the rockets flights and the staff there are more than happy to talk about it. 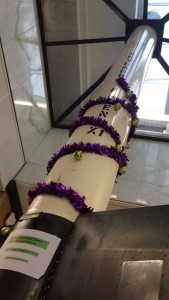 And finally, I couldn’t miss everyone’s favourite campus transport: The Paternoster, is a type of lift, with lots of carriages which are continually circulating so you can ‘hop on’ at any point. The one in Leicester is inside the Attenborough building, and is one of the last 3 in the UK. Riding up to the top floor gives you great views of the campus and city and you can actually ride all the way over the top. Overriding is great if your with someone who hasn’t been on it before- they will most likely freak out! The paternoster is actually the slowest method of going from the top to the bottom of the building (yes, we’ve tried it) followed by the stairs and then the normal lift, unless the stairs person presses the buttons to the normal lift on the way down, as happened in our race. Also use the time-lapse feature on your phone as your going up; its so cool. 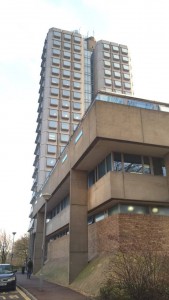 There you go then, those are my favourite unusual things to see around campus. Please comment if there are any more I’ve missed because I’m sure there are many more secrets Leicester hides. I know somewhere there is a mortuary where they kept Richard III but I’m yet to find that!