The mouse trap car which I talked about in my last blog had major wheel spin and ended up going backwards from the starting point. To resolve this we moved the heavy mouse trap to directly above the back wheel. As we made this and a few other alterations, other teams tried out their vehicles and some of them were very quick, some were less than 4 seconds. No one, including us, were expecting very much as we came to give the car another run. I placed it on the starting line, lifted up and the weight of the trap just gave it enough grip to get going without bogging it down with too much friction. Our careful lining up of the holes and the use of three wheels, reducing front wheel friction made our car practically fly. Our time was less than 2 seconds! More alterations, mainly making it more aerodynamic, clipped more and more milliseconds of our time and by the end of Friday’s competition, our top 3 times were all better than the closest opposition.

For winning the day we got a sports bag bag full of the sponsors (General Electrics) goodies: a memory stick, a leather notepad, a tee shirt and a hoodie. We had to wait until the next day for the other half of the teams to complete the challenge but we’ve now found out that we beat them too so a cheque for £500 has come through the post as well as the promise of a tour round GE’s Factory. On a side note, to end the day we stopped at Wagamamas, which I’d never been to and found it (controversially) very overrated, but I’ll save that one for another day!

One more memory from the event was that at lunch they had a mini canteen and some elderly gentleman came and asked to sit with us. It turns out he was a agricultural engineer who was from Leicester. He was very funny and had some great stories to tell but the one that stuck;  just before we left he told us “Boys, there are so many opportunities in life, way more than in my day. But they’re not going to come to you. TAKE THEM!” It was a really random piece of wisdom but on the day we got so much out of; career advice and motivation, lots for the CV, and of course £500, was only because of a small poster in the engineering block which 9 times out of 10 I would have completely ignored. Maybe we should put ourselves out there a bit more, I certainly will try to.

I hope you all had a great Christmas and New Years Eve and very good-luck if you’re revising for exams like I am. 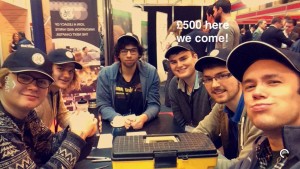 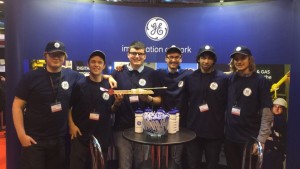