I’ve never liked Shakespeare plays and I don’t think I ever will. I want to like them! I live 20 minutes from Stratford (Upon-Avon) and have been to Mary Arden’s Cottage, his birthplace, and to the Royal Shakespeare Theatre and all that sort of thing there. His history is fairly interesting; He was (probably) born and died on the same day, he supposedly stopped at my local pub in Inkberrow on the way to get his marriage certificate in Worcester and there is loads of debate whether he was gay or not. So, yeah, he’s pretty famous and he’s from my area so I feel like I should like his works but I really don’t. English students will tell me that I don’t understand it deeply enough to appreciate all the hidden meanings and messages. Actually I’ve found the plays that I’ve studied in the most detail are actually more disappointing. I assume everything I don’t understand in the plays that haven’t studied is very clever and cryptic, the more I learn, the more I’m disappointed. 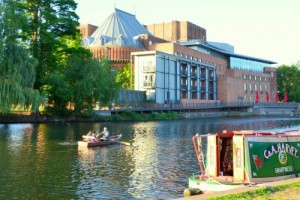 The Royal Shakespeare Company and the River Avon- by Martin Humphreys

Despite this, yesterday, I thought I would support my friends at LUTheatre’s show, Macbeth in the SU. It was actually pretty good. The acting was very good; Macbeth, Lady Macbeth and Banquo were brilliant and the witches were incredible. I don’t want to spoil it for anyone who’s going to watch it but the stage was set in the middle of the hall, with the audience surrounding it which was effective and the music and lighting was fantastic.

So all in all, pretty good, but I can’t rate it as very good because it was still a Shakespeare play, and I just don’t like them. I just felt exhausted and frustrated trying to keep up with the dialogue. Interestingly, one of the people I was seeing it with is Italian and he said it’s actually easier for him to understand due to the language being closer to Latin. There are more shows tonight and on the weekend. Don’t let me put you off- I’d go and see it again, and would recommend it even if you don’t like Shakespeare like me. If you do, or are indifferent about the Bard, you will absolutely love it! I would love to hear your opinions on this. You now know I think his plays are out of date and overrated- I think as a writer he has been elevated to God status at the expense of modern authors and playwrights.

Maybe, like one of the witches’ warts, he will grow on me but to be honest- I’m not holding my Macbreath. 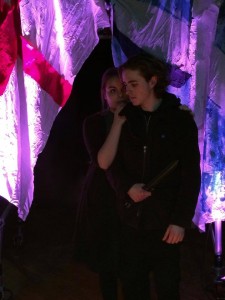