I’m sitting here in a very damp, very cold caravan listening to the storm outside and dreaming back to last weekend in the sun.

Last weekend was the third annual British Quidditch Cup or BQC. It was held in Rougley in Staffordshire and it was the biggest UK Quidditch Tournament yet. It hit me how much more mainstream Quidditch has become whilst talking to a Hotel Receptionist in Stafford. All of the Leicester team, the Leicester Thestrals, stayed at the same hotel in Stafford and as we all filed out at a quarter to six in the morning on Saturday the receptionist looked at me puzzled and I said that we were going to play something called ‘quidditch’ she replied ‘oh yes, BQC!’ She had seen it on the local news- Midlands Today. My friend from Staffordshire is really keen on Sports and came to watch and it was great that the standard of play was good enough for him to take it seriously. I firmly believe Quidditch is moving away from a bunch of Harry Potter Nerds on broomsticks to a very serious-ish sport!

On the First day of the tournament we completely dominated our group, even beating the Loughborough Longshots (our arch nemesis). On day two we somehow were positioned so we had to play Loughborough again. If we managed to get past them we would be up against Oxford who are the best in the country and if we beat Oxford we were to face Southampton- last year’s winners. Daunted with those prospects we lost to Loughborough and that was the end of that. We placed 9th overall. Very disappointing, it’s a bit of a sore subject and I don’t want to dwell on it!

Something Quidditch related that I would like to talk about is EQC, the European Quiddich Cup. Leicester was one rank too low to be awarded a place but there is a shortage of snitch runners for the event. (A snitch runner is the person who runs around with a ball in a sock tucked into their shorts. The ball is the snitch and if that is caught the game ends and the team that catches gets 30 extra points.) I’ve been a snitch runner before but that was for fun. At EQC, the snitch runners receive 5 Euros a game, 4 star hotel food and accommodation and a free tee shirt AND the tournament is in Gallipoli, Italy! Sat here in my wet caravan in Wales, I’m only too keen to apply. I’m not sure whether I’ve got a place yet but I really hope so- I’ll keep you posted as soon as I know.

I hope the storm Katie isn’t bad where you are, please stay safe! 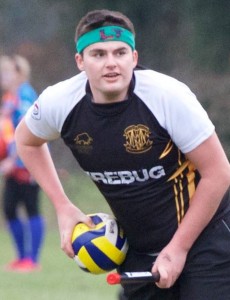