It really seems like a oversight to talk about an English degree at Leicester without also talking about the library, or ‘li-berry’. Opened in December 2008 by the Queen, the David Wilson Library is a focal point in most university educations. It’s where most people spend their free time between one lecture/seminar and another, and it’s open 24 hours a day on every day except Saturday, when it closes early. Like a safety net, the library is there if you need a book at 4am. Unless you want a book at 4am on Saturday, in which case you’re probably your own worst enemy.

The library has many interesting features which you can look up on the internet, but here are some lesser-known facts: on the second floor there is a well-hidden silent study computer room which always has way more free computers than anywhere else, on the third floor near the sheet music there is a modest selection of high-quality DVDs for rent, on the ground floor near the help zone there is a set of staplers and hole-punchers for public use, the coffee-and-cake set in The Library Café is one of the betters deals available on the le card, and the type of wood used inside is ‘cherry-wood’. I never said the lesser-known facts were interesting.

Many a time have I spent the evening in the placid dignity of the library, stepping out at the end into the watery blackness of the night, and many a time have I spent the entire day in the library during exam periods, having lost the ability to study without absolute silence. Naturally then, many a slice of cake have I had in The Library Café. I also wrote a short story set in the library for the John Coleman Creative Writing Prize. It didn’t win, but that wasn’t for want of zombies. There were plenty.

So that’s my quiet tribute to the library, a building I owe a lot to this past year and a half and plan to continuing enjoying in the future. 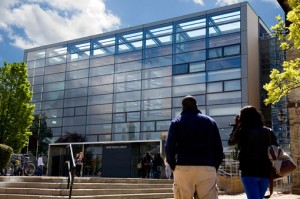