Opinion and Debate: All the President’s Men

Something I don’t mention that much is that I’m the Opinion and Debate Editor for the University’s online magazine, Tingo. I’m a casual kind of guy, writing articles of varying and often dubious relevance when the mood strikes me, but the most interesting thing my armchair journalism has opened up to me is LUDA, the Leicester University Debating Alliance. I’ve sat in on and written up reports on numerous debates now — debates upon subjects far beyond my limited knowledge — by LUDA, and it’s an enlightening experience. LUDA is usually joined by other interested parties, such as the Law Society and ELSA (European Law Student’s Association).

I’m always impressed by the society’s dedication to both sides of the argument, just as schools used to demand in the form of rhetorical and grammatical education in the days of Shakespeare. The Palestinian State, EU membership, the death penalty — there are stances on all these issues that are politely considered ‘correct’ in bourgeois society, and it’s eye-opening to hear counter-points made so eloquently. Often I’ve found that it is the team on the more difficult side of the proposal to defend who have won, simply because their situation has made much more ingenuity necessary. The debaters don’t have to agree with the points they are making, but they do have to pursuade. This is what university is about, really: hearing the other side of the argument.

On a side note, these debates give me a rare opportunity to enter the Fielding Johnson (Law) Building inner sanctum. Very different from anywhere else in the university and the oldest building on campus, much of its interior is wood-panelled and decorated with portraits and etchings. The Council Chamber is particularly impressive. They don’t build places like this anymore.

I see that Harriet on the Law Blog has already written about a debate that I was present at, so if you want a second opinion check out the link. Roger Helmer, MEP — an interesting man indeed. 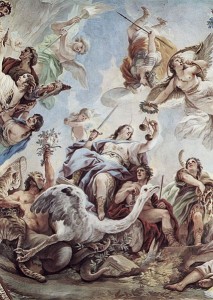