The Best Books: The Reader

At this point I’ve read most of the books on the course this semester, so I’m vaguely qualified to say which ones I think are the best. I’ll pick one from each module, to be democratic: one Critical Theory text, one Medieval Literature text, and one From Satire to Sensibility text. Social justice!

Based on my experiences so far, the main aim of critical theorists is not to help the reader understand their critical theory. The aim is to baffle the reader into submission. See Hélène Cixous and Jacques Derrida for two shining practioners of this technique. Which is why it is strange that I’ve chosen a writer who can also be very baffling: Roland Barthes. His bafflation (it’s a word) is of a different sort to the others, I feel. When reading Mythologies, I feel that Barthes’s sensual streams of consciousness convey the point he’s making; his point could not be made without the use of some bafflement. Mythologies describes the second-order of language beyond the literal meaning. His concept of ‘myth’ refers to the way wine is perceived as prestigious, for example, or why wrestling has its own unwritten rules of conduct. His language, translated from the French, is quite poetic and much more of a pleasure to read than most of his contemporaries. 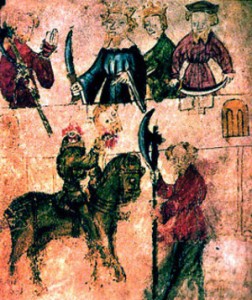 The best Medieval Literature text is undoubtedly the anonymous Sir Gawain and the Green Knight, which I’m ashamed to say I read in translation. I feel that looking at the gloss after every third word would have diluted the surprisingly-resonant power of this, considered the greatest of all the Arthurian Romances. In the poem, Sir Gawain is challenged to behead the Green Knight and then allow the Green Knight to behead him a year later. He is, of course, surprised when the Green Knight stands up after being beheaded and reminds Sir Gawain of his promise. Every aspect of the plot is weaved with every other aspect, and the tone is melancholy and questioning of the greatest chivalric ideals. This is a poem that anybody could pick up and read in translation — something I can’t recommend enough.

The Satire to Sensibility text is harder to choose, but I’d say Alexander Pope’s The Rape of the Lock is the last man standing. It is far less weighty than the title would imply: the rape refers to a Lord’s snipping off of one of Belinda’s locks of hair. This action, based on an actual squabble which Pope was aware of at the time, is turned into a mock-epic with battles between sylphs and salamanders, copious extended metaphors and extremely dramatic descriptions of putting makeup on. The text is funny, but its verse is also extremely beautiful. You don’t tend to get satire like this nowadays. Nobody wrote a mock-epic about MPs’ expenses (if they did, please let me know though).

One response to “The Best Books: The Reader”