Unbelievably, in the burning eye of the Easter news drought, I have something to report on: the other day I saw The Duchess of Malfi at the Old Vic, something so relevant to my subject it hurts. In fact in the first year I studied The Duchess of Malfi (by John Webster) and did a presentation on it, so seeing this somewhat-underrated play performed was an opportunity not to be missed. It’s opened to generally-laudatory reviews, with much of the criticism there has been falling on the script itself rather than the staging. I can see that it would be somewhat polarising, but it’s hard not to love such blatant disregard for characters’ lives.

Yes, it is a grim play and I think the Old Vic’s staging does justice to that. Some fist-clenchingly-long stranglings, prolonged stabbings, and frothy poisonings parade their way across a chiaroscuro, Italianesque palace structure populated by cloacked dancing figures, and the cast convincingly wring the grim implications out of their lines. It’s not exactly a subtle play — lots of shouted motivations and loud murders — but I found the cast uniformingly convincing with Websters’s effective poetry. Eve Best  is effortlessly sympathetic as the powerful and unfortunate Duchess, and the remainder of the cast capture the madness of her court: Harry Lloyd as a bestial Ferdinand, Finbar Lynch provides a calculating Cardinal and Mark Bonnar is a booming Scottish Bosola, (potentially the most interesting character of the play). Tom Bateman as a breathless Antonio made me realise just how small a part the second protagonist actually plays in the story. It’s really all about the Duchess and Bosola.

It’s not Shakespeare but The Duchess of Malfi has an excellent cast of characters and is well-worth the watch for the Renaissance Drama enthusiast. A knowing, hearty piece that gives the audience what it wants. Just reading the play, you can’t possibly visualise the macabre mayhem on the stage. Under 25’s also get a discount at the Old Vic, so take advantage of that while you can. Because if the death toll at the end of this play reflects real life, you might not have much time left. Book now! 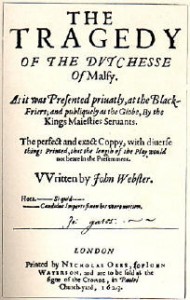 If Webster had it his way, this paper probably would have been made from someone’s skin.