Thank you to all those who attended the university Open Days on the 26th and 27th of July — even I was there, and I already go to the university. Listening to what prospective English students were talking about, I’ve decided to note a few of the issues over here.

One very important point is the approach of the Leicester course to English, which people seemed unclear on. It’s largely a literature rather than a language course, although there is generally a language(-ish) module per semester, with the option for more in the final year. Those of you worrying about whether to take English Literature or English Language at A-Level, or those of you worrying because you’ve already taken one or the other, needn’t. Both subjects are accepted individually, or even combined as the Frankensubject English LitLang. Just don’t come expecting to be able to sing every seminar about how much you love indirect objects and phonemes. 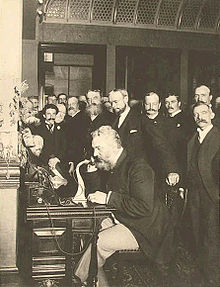 There’s also quite a slant, I would say, towards the old rather than the new. Much of the first two years is taken up by the Dark and Middle Ages.  Did I say Dark Ages? I didn’t mean that. Don’t call them that. Call them something else. Whatever they are, they’re not the twentieth century, which in the first two years only really surfaces in Reading English, The Novel, and Critical Theory — the latter of which is now called ‘Concepts in Literature’. Anyone who has read this blog before may have picked up on the Chaucer module — this too has been updated into ‘Chaucer and the English Tradition’. I can’t confirm anything but I’d venture a guess that the module now extends into Chaucer’s contemporaries, like Lydgate and Gower. The title change is presumably significant, at least.

It was entertaining to meet so many enthusiastic pupils, and on such a sunny day as well. If you missed them, or want to come back up, the next set of open days are September 22nd and October 6th. Presumably I don’t need to point out the importance of visiting a university before you think about spending three or more years at it…or do I?