The truth is that Turin doesn’t have the same kind of name-recognition as the most famous Italian cities, despite its important status. It’s highly northern (Piedmont) and didn’t win as big in the Renaissance lottery as Florence, or Rome, say. And yet it’s a city with two major universities, heavily populated by Erasmus students, and most relevantly of all it’s one of the choices English students at Leicester can make. So this post is going out to all those of you who need to know why a place in Italy that barely even sounds Italian is a place worth spending a year at. Some history, some observations.

In terms of history, the most interesting stuff didn’t happen too long ago. Turin was the first capital of Italy, in 1861, when the country was unified (a process known as The Risorgimento) by the smartest men in the room. The city is crammed with the constructions of the Savoys, Italy’s old royal family, such as Palazzo Reale, Palazzo Madama, and Villa della Regina. Its royal history is apparent just by looking at the streets. Utterly different from iconic Italian cities like Rome or Naples, Turin is an august grid of wide streets lined with pillars and trees; the silvery buildings are uniformly of baroque and neoclassical style, and the dignity is not just spent on important buildings — very few edifices within the city centre depart from the theme. Large green gardens  like Parco del Valentino are always within walking distance, and the River Po runs through the city accompanied by foliage-rich banks. Visually Turin is, despite its reputation as a grey place, one of the greenest cities in Italy.

The main tourist attractions are the aforementioned Savoy mansions along with the Museo Nazionale del Cinema, which is housed in the lofty Mole Antonelliana tower, and the Museo Egizio, the largest museum of Egyptian artefacts outside Cairo. Naturally it also features some very impressive churches: specifically the Duomo, the Santuario della Consolata, and the Chiesa della Gran Madre. The most expansive and picturesques piazzas are undoubtedly Piazza Castello in the heart of the city, Piazza San Carlo in the best shopping district, and Piazza Vittorio Veneto with the Po lapping at its side.

You’ll never be far away from pizza and all those staple Italian dishes in Turin, but its specialities are quite different. The local savoury foods tend to be meaty and stewy, but to the detached observer the focus is clearly on dessert. The beloved sandwich-polisher Nutella comes from the area, in its original form known as gianduja or gianduia. It also comes in delicious bite-size form, gianduiotti. Ice cream is everywhere, and the oldest in Turin (I believe) comes from Caffe’ Fiorio, founded in 1780. It’s old but it’s still edible. The choice, price, and taste, of ice cream in Turin is far better than you would ever expect to find in the UK. For something more alien, I’d reccommend latte dolce fritto, fritters made of sugary milk.

I can’t build up the English reputation of Turin all by myself (yet), but at least now I can say I tried. Check it out; it’s underrated. Way better than Milan. 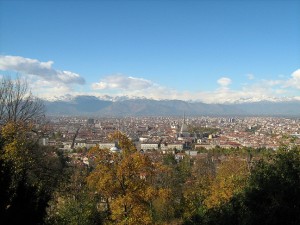 This is what the city looks like if you stand on your tiptoes.