You heard me. What is the one word that describes Italy at Christmas? Panettone. There are stacks of them at the supermarkets and in the shop windows. Everybody brings them to everybody else’s house as a present at parties. Their huge basilica-sized boxes form a miniature city in every living room. It’s a kind of bread cake with sultanas and other such candied fruits. It has the monopoly on Christmas in Italy.

If there could be a second word it would be pandoro.The pandoro is the diabetes-inducing alternative to panettone. It’s basically sugar in bread form and dusted with sugar, and sometimes filled with icing. There’s none of the reassurance that you’re at least eating some fruit that comes with panettone. Pandoro is all sugar, all the time, and I, for one, approve of it.

Have a excellent festive season, a Merry Christmas and a Happy New Year. 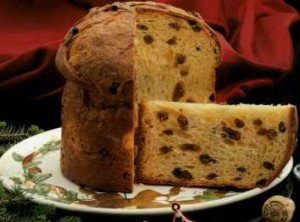 This is how it begins, then later there’s running and screaming…