US Secretary of State John Kerry’s recent politically-suspicious decision not to speak French has made me think a bit about the realities of monolingualism, whether real or pretend. Here in Turin, English is not widely spoken, and not widely spoken fluently. Naturally, I think the likelihood of finding someone who speaks English in Italy is a thousand times greater than finding someone who speaks Italian in England, and if you were in a more touristic city the amount of English speakers would increase. But, if you’re monolingual (and if you’re British, chances are that you are unless things have changed a lot since this article was published), take some comfort in the fact that mandatory English lessons in European classes might have had just as little effect as French lessons in British classes. Well, take comfort if you like schadenfreude.

When we go on holiday, we tend to assume that we can get by only speaking English. Those French or German lessons, we figure, can get us by, and if we go to somewhere with an unpopular language — “well hey, nobody speaks Romanian, surely they’ll speak English! Now where’s Dracula’s castle? Blah!” I’m not here to chastise, although I can offer two possibilities as to why Italians might not be particularly interested in learning English to the point of fluency. And this relates to you, potential Year Abroad in Italy student, because if they don’t speak English you better be able to fight the good fight in Italian.

The first and most pervasive factor for me is dubbing: everything in Italy is dubbed into Italian. Voice actors have quite the monopoly. Even MTV stuff which you’d think people would refuse to spend precious moments on this Earth dubbing gets dubbed. Turin is full of cinemas, but if you want to see even the most Oscar-worthy films in English you’re in trouble. For the record, the only place you might find some of them is the Centrale Arthouse. This means the exposure to English which comes to many countries from subtitled films is nonexistent. The second factor, I think, is that when the world generally tells you that you speak the most beautiful language in it, you’re hardly encouraged to learn another language, especially another language which contains words like ‘curdle’ and ‘Watergate’.

What I’m trying to say is that although your Italian needn’t be fluent when you do an Erasmus year in Italy, don’t expect everyone’s English to be either. Going to a foreign country is the best (the only?) way to improve your language-speaking, but a basic understanding beforehand shouldn’t be undervalued. 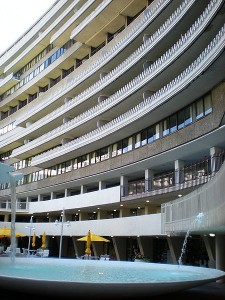 The ‘Water’ part is fine. The ‘gate’ part too much.