In your third year of studying English at Leicester you get the chance to pick two optional modules called special subjects. Given that the rest of the course is made up of compulsory core modules this is all very exciting! Last semester I studied Contemporary Women’s Writing, which I loved. This term my special subject is taking me in a very different direction – Tragedy.

I have only been doing this module for just over three weeks but I am already finding it fascinating. The module focuses on the three key tragic authors: Sophocles, Seneca and Shakespeare. They all have wildly differing backgrounds but each has had a profound influence on the genre of tragic drama.

Sophocles (497/6 BC – 406/5 BC) was an Ancient Greek dramatist who wrote over a hundred plays for the Athenian masses. Unfortunately only 7 survive! His most well-known is probably Oedipus The King, which we began the module by looking at.

Seneca (c. 4 BC – AD 65) was a Roman writer, philosopher, and playwright who’s drama was composed for a very elite, aristocratic audience. He also wrote a play of the Oedipus myth which we have compared to Sophocles’ 500 years younger version.

We looked at these plays thematically, focusing on their presentation of mothers and sons. To round off our discussion of mothers and sons in tragedies we looked at Shakespeare’s iconic play, Hamlet. I have studied Hamlet before so it was very interesting to enter it from a new angle, and to trace the influence of classical tragedy in it. We also discussed Freud’s seminal psychoanalytical work, in which he discusses what he called the oedipal complex, inspired by the incestuous Oedipus myth. Freud suggests that Hamlet actually had a repressed desire to kill his father himself because he took his mother’s attention. Interesting but complicated stuff!

Next week we are moving on to look at fathers and daughters, starting with Sophocles’ play Antigone and comparing it the week after to Shakespeare’s King Lear. 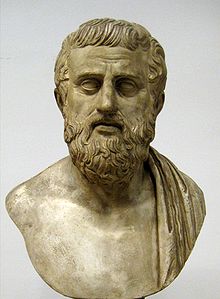 A bust of Sophocles.

Jennifer graduated from the University in Summer 2013.