We’re in the second semester now here in Turin, which means three new modules. I hand-picked them myself. For anyone wishing to study English Literature abroad, I think they’re a rather good representation of the kind of things to expect. This post is, of course, the sequel to the Emmy-award-winning Module Madness I put up in December. If Peter Jackson can make three substandard-quality films out of The Hobbit then I sure think I deserve to squeeze out as much content as I can without having to think of a new title.

This module would be unremarkable, covering areas I’ve already studied extensively at Leicester and Turin, were it not for a fact hidden cunningly in the title: it’s taught in Italian. Erasmus students have no obligation to take Italian modules, and in fact it’s often recommended that they don’t. However, I felt confident in my previous studies and in the fact that the texts — and the exam — are in English. The professor, Paolo Bertinetti, quite literally wrote the book on the history of English literature. In English. A strange setup, you say? Perhaps it doesn’t make sense. Perhaps nothing in this world makes sense. I just sit there, listening real hard to Italian explanations of the layout of a Renaissance London theatre and how to pronounce ‘Derby’. Sometimes I get it, sometimes I don’t. But it’s extremely useful for my language effort and the set texts make for classy reading: The Tempest, Moll Flanders, Joseph Andrews, and Pride and Prejudice.

This is a module with a wide remit. It covers the literature of just about every former English colony, plus women’s literature, plus the environment, plus science, and along the way manages to include Margaret Atwood’s The Year of the Flood, Amitav Ghosh’s The Hungry Tide and Michael Ondaatje’s Anil’s Ghost. Postcolonial literature was given some attention in the Critical Theory module I took at Leicester last year, and can be returned to again in the final year, but here the literature is so postcolonial that the authors don’t want to be in the same sentence as the colonies. Yes, it’s a module dealing with some very delicate subject matter, made apparent by the fact that postcolonial studies is a field in constant embarassment of its own name. Or so it seems from this vantage point (Palazzo Gorresio first floor, Via Giulia di Barolo, Turin).

American Culture in the 1960s

Has there ever been a decade like the 1960s in a place like America? Can any subject summon up such a ready-made mental film reel of imagery? Has there ever been a module which has made me glad to be sitting at a desk with limited leg room at 8am two days in a row? I’m not sure what I was getting at with the first two questions but the clear answer to the third is ‘yes’. Covering JFK, feminism, hippies, civil rights and travelling between fiction and non-fiction (often without a clear crossroads between the two), book and film, studying the 1960s USA is joyous. The set texts are Don DeLillo’s Libra, John Howard Griffin’s Black Like Me, Tim O’Brian’s The Things They Carried, Joan Didion’s The White Album, and Abbie Hoffman’s Steal this Book, but this module goes beyond the chalk lines of set texts and presents us with a huge portfolio of speeches and studies to absorb, not to mention includes a film viewing each week. The films include Oliver Stone’s extremely personal JFK and a personal favourite of my own, The Graduate. 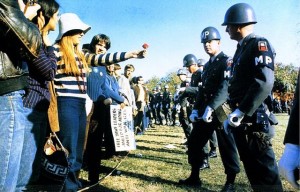 Their hats are hard and hers is soft. Perhaps also, their hearts? Nobody said metaphors were hard.