I have a real nice subject to talk about this week, because it draws together English literature and Italian culture. The subject is Incroci di Civiltà, a literature festival held every year in Venice with authors coming from all across the world to be interviewed. Entry requires reservation, but reservation is free. Which is only fair, because Venice is not a cheap place. Quick warning to anyone planning a trip: think very carefully about sitting down to have a coffee anywhere near a nice view: the coperto (cover) charge for sitting down can sometimes near double the cost of the probably-already-expensive drink.

The authors I heard talk at Incroci were Stephen Greenblatt, American literary critic and specialist on the Renaissance, and Amitav Ghosh, accomplished Indian novelist who generally writes in English. Both answered in English, although questions were posed in Italian. This was fine, albeit surreal, for Greenblatt, who understands Italian, but Ghosh had to listen for the translation in his headphones as his two interviewers asked questions. Some of the questions would probably have qualified as novels in their own right, but that’s another issue.

Greenblatt’s topic was his recent book, The Swerve, a narrative about the rediscovery of the Roman poet Lucretius’ ‘On the Nature of Things’ by an Italian book collector called Poggio Bracciolini. He argued that this event was a factor which shaped the Renaissance — which Greenblatt very much assured us actually happened — and thus the modern world, due to Lucretius’ singular portrayals of humanism and atheism. Ghosh mainly discussed his own recent novel, River of Smoke. It’s a story based around the opium trade in historical Guangzhou (or Canton), a city which Ghosh proposes to be the most cosmopolitan city in history. An incrocio di civiltà, if you will (translator’s note: ‘incrocio’ means ‘crossroad and ‘civiltà means ‘civilisation’. The preceding line is therefore hilarious).

What of Venice? What indeed. Surely one of the most beautiful cities in the world, hampered at every turn by the no I don’t want to buy a rose and the no she already has a perfectly good handbag and the occasional who would want one of those squishy things you bounce off the ground. The street sellers certainly don’t ruin Venice, that’s not fair on them, but you preferably want to stay off the tourist trail whenever possible. Which is easier than it sounds: often all it requires is taking a side street and you find yourself in an area of much more bearable human-bodity-density and food-price-affordability. Can’t complain about Venice’s street signs either, all the major points on the island are easy to find. Well, I don’t think my opinions on Venice being beautiful but touristy are particularly revolutionary, so I won’t waste your time any longer with them. 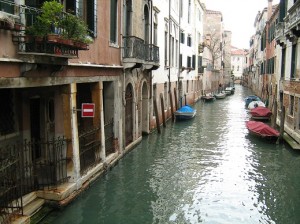