Finally I’m able to talk with experience about Erasmus in a country that isn’t Italy. It only shares a single letter, in fact. That country is Denmark and the city is Copenhagen. Although the School of English doesn’t have links with Københavns Universitet, our School of Law does, and I think that in general the vast differences between Erasmus experiences between countries should be stressed.

Whereas Italy is in a rather public economic and political crisis due to problems that can be traced back to prehistory (let alone pre-unification), Denmark has managed to hide on its northern peninsula and weather the figurative storm (and also the frequent literal snowstorms). This means a high standard of living which Erasmus students can benefit from. However, a high standard of living for Danes (including high minimum wage, high quality health care, high tariff on sugary snacks) comes from high taxes, and if you’re an Erasmus student then you’re neither paying taxes (good) and probably also not earning high wages, or any at all (bad). This makes Denmark an extremely expensive place to live. It’s counted in the same bracket as Italy for Erasmus grant, but let me tell you Turin is usually half the price or a third of the price.

That’s a negative, here’s a positive: Copenhagen is one of the most bike-approving cities in the world, perhaps the. Pick up a bike and you’ve got your transport set. Wide cycle lanes in both directions nearly everywhere combined with flat terrain and a general appreciation for this non-pollutory mode of transportation make cycling easy even for someone like me. I rented a bike on my visit to Copenhagen after not having touched one in a decade and didn’t even die. Didn’t even come close. No bus tickets, no taxis, no walking. And also likely no gym memberships if that’s your thing, because cycling everywhere will keep you plenty in shape. Especially during the winter.

The winter’s a negative. It’s very, very cold. But so is England, so deal with it.

I can’t talk with authority about the study, but I understand that compared to Italy it’s less hours, less oral exams, more essays, more challenge. There’s also the plus of being able to study in the Black Diamond, Copenhagen’s premier Star Wars prop and library since 1999. Another concept that students will identify with is hygge, the eternal search for cosiness which takes a harsh winter and turns it into a fireside-situated, wood-panelled, mulled-wine-quaffing, candle-lit, sheet-coccooned, and generally delightful experience for all the family. 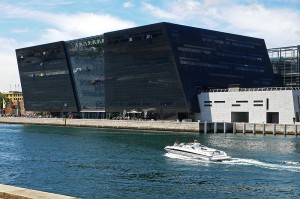 Soon preparation will be complete, and the Rebel Alliance will be unable to stop us…