Last week I said what was good about returning to the UK after an extensive Erasmus year in Italy. That’s the good news. Whilst I’ve been preparing for the International Summer School I haven’t had time to catch Post-Erasmus Syndrome yet, but it’s certainly been difficult not to notice the things which are most obviously worse here — in the short term, at least*. Almost as difficult as not posting hyperlinks to my own blog. Here’s a list!

1) Gelato. Why is good ice cream so plentiful in Italy and so absent everywhere else? Where are the two euro cups? Where are the gianduja, bonet, and zabaione flavours? This is easily number one on the list, and the only entry that’s in any order.

2) Book stores. How is it that book stores are a dying art in the UK, where a high street can barely sustain a W.H. Smiths and a Waterstones together, and in Turin they can be the most common establishment after cafés? Note that I don’t even remotely want to hear the brutally truthful economics-based answer to that question.

3) Piazzas. They’re huge, spacious, full of places to sit, and they make everyday life a postcard. Work on it, England. 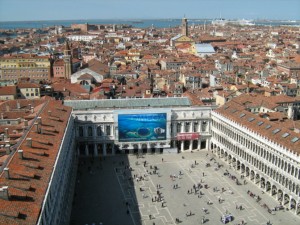 Piazza San Marco in Venice is nice, but it’s no Piazza…Tonbridge High Street.

4) Public transport. In much of Italy, and certainly all of Turin, if you have a GTT public transport ticket, you don’t need to know where you’re going, you can get any kind of public vehicle, and you have 90 minutes to get to your destination. It’s a system that’s largely based on trust but even with Oyster cards in London we could learn from this setup.

5) City spirit. Turin has massive, well-funded, well-attended public events on all year round. There’s a city-based patriotism in Italy which is actually quite healthy and not close-minded or prejudiced, unlike those sneaky bandits in Milan.

6) The price of coffee. You’re not fooling anyone, England. That is not the conversion rate.

7) Drinking. The UK has fairly bad reputation abroad for drinking, and when you see so many Italians slowly enjoying a aperitivo glass of wine with a plate of buffet food, it’s not hard to see why they might look down on eight-stop bar crawls. Probably one for the government, this: more mandatory delicious food whilst consuming alcohol (and less of the latter).

8) The Abbonamento Musei. Turin doesn’t have free museums like much of London and certain other places, but it does have the Museum Pass. Pay 30eu (for students anyway, a bit more otherwise) and you can visit all the museums and historical attractions in Piedmont/Aosta for free, for the year. As many times as you want. It’s an investment that pays off very, very quickly.

9) Course choice. The Italian university system may be confusing from the outside (also from the inside) but it’s hard to complain about the choice students get in their modules. You can customise your degree quite intricately, like putting Barbie’s clothes on Action Man.

10) Food quality guarantee. You walk into a café or restaurant in the UK and unless it’s fairly well-known, you don’t know what you’re getting. In Italy, I’m confident to say you can guarantee the quality and price of your coffee, your croissant, perhaps your sandwich, your wrap, probably some biscuits, your pasta. Your pizza, most likely. You’re pretty safe, unless you’re glued onto tourist rails. Some Italians would probably disagree with me a bit, but they don’t know how lucky they are.