And so this blog begins the last of my year abroad adventures: it’s the end of Erasmus and the initiation of the ISS (International Summer Session) at HUFS (Hankuk University of Foreign Studies, which I personally translate as ‘Korea University of Foreign Studies’). I’ll link you back to here to remind you why a University of Leicester student might be sent to South Korea – a.k.a. the Rebublic of Korea, a.k.a. not the People’s Democratic Republic of Korea, a.k.a. the one that made Oldboy. The cool one.

I’ll go into the culture a bit more in a later post but for now I’ll just acquaint you with what an exchange student here can expect, and why I’d highly recommend it despite being just 1/5th into the course.

The ISS is a course run every year for a decade that brings students from all over the world to Seoul to take part in a five week summer school made up of study courses (usually three), field trips, and group events. There’s a long list of courses to choose from, generally talking about the media, economy, and philosophy in East-Asia in general, but mostly South Korea. I chose Korean Cinema, the Korean Wave, and Beginners’ Korean. The latter is a highly-recommended part of the course, as at least learning the beautifully-logical hangul alphabet will mean you can at least read Korean if not perhaps fully understand it.

The trips this year include the major attractions at Seoul — in whose most famous fashionable district women jog backwards, school kids cross the road whilst reading books, and old people are frowned upon (I’m told)* — as well as the Boryeong Mud Festival, Gwangju, and the DMZ at the border of North Korea. The last one depending on the likelihood of war, of course. Amongst the activities are making patbingsu (a sweet crushed-ice desert), gimbap (rice rolls), traditional fans, and Korean movie screenings, plus general strollings around the extremely economical eateries of Seoul.

Successful University of Leicester student applicants have their tuition fees waived and are offered the chance of a scholarship, so it’s an opportunity that won’t come up again easily. Especially since the wonderful university staff and students offer a look into Korea that you just can’t get normally get on a short visit to the country. Stay tuned. Eat your kimchi. 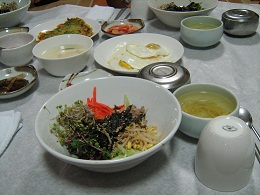 Why are English portions both stingier and worse?