I’ve been in Seoul on this summer school long enough to talk about the place with some vague authority. I think that, like Turin, it’s a city that a lot of people might not know much about. It’s not out there every day busting its butt like Paris or Tokyo, but Seoul is the capital of one of world’s most impressive economies and deserves to get some more PR. In this post I’m going to talk about some things that are good, bad, and weird, so it’s extremely lucky there’s a Korean movie called exactly that which I was able to use for the title. Probably going to get more good and weird than bad though.

The first thing that would strike anyone, and especially any student, is the fact that food and nearly everything else here is comedically cheap. The dorm here at Hankuk doesn’t have kitchens, problem? No problem: it’s cheaper to eat out. For 5000 won you can have a restaurant bibimbap with side dishes. I make that £2.92. That’s a serious-sized meal. Still too expensive? Cup ramyeon‘s 900 won (£0.52) from the university store. Don’t get me started on how cheap the university cafeteria is. Now that’s what I call student prices.

Something else that’s cheap and delicious in Seoul is the subway. The subway here is the best I’ve ever seen, with extremely clear maps and signs telling you where to go, where you can change lines, which side the doors open on, etc. A journey will usually cost you 1000 won (£0.58), increasing minutely depending on how far you go. It’s clean, well-air-conditioned, and the underground walks between platforms and stations are filled with shops.

If I were forced at fan-point to name something bad, I wouldn’t have much to say but the one thing I would have to say would be obvious: the coffee here sucks. Coffee in a cafe costs the same as a Korean meal, and it’s also quite bad indeed. Canned chilled coffees are very popular here, and they are also rather bad. Oh, and the second bad thing is the weather. You can stand the heat, but can you stand the humidity? Moving around in a Seoul summer means swimming through wet hot air every day, relying totally on air conditioning for survival.

People like me who haven’t been to Asia before will quickly see that South Korea’s not like Italy. It is, however, almost exactly as you imagine it. Neon signs everywhere, aquariums full of squid and depressed fish outside every seafood restaurant, plastic-surgeried K-Pop idols advertising absolutely everything, wi-fi and smartphones everywhere, open-air markets selling pieces of the animal that many people wouldn’t be thrilled about eating (I enjoyed the intestine blood sausage though), English writing everywhere and about 60% of it successful. There’s so much to look at on every street, in every alleyway. You feel extremely safe everywhere. The staffmembers at the ISS (International Summer School) are nice beyond compare.

That enough PR for you, Seoul? You’ve earned it, kid. 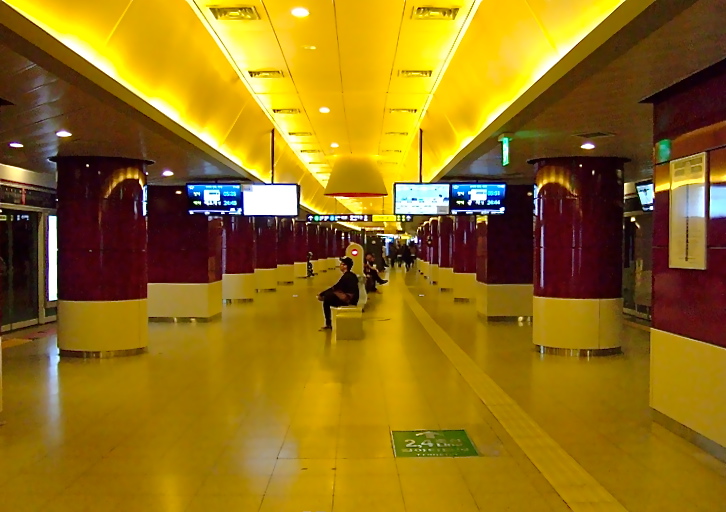