Anyone keeping track of this blog will have noticed that I’ve spent most of this year abroad, and that I have a poor grasp of what constitutes an ‘English’ blog. This post is the sequel to Returning to the UK, in which I talked about what it’s like to return home after spending a long period of time in Turin. Today I’m going to do the same for Seoul. This is actually more relevant to an English degree that you think: Seoul is absolutely full of English teachers, and teaching English in East-Asia is one market that’s quite easy to break into for English graduates.

1) I mentioned that in Seoul, and especially around the Imun-dong area where Hankuk University for Foreign Studies is situated, you can eat at Korean restaurants for very little. This means that it becomes part of a student’s everyday life to eat out. This is something I’m going to miss in the UK very, very much.

2) Public transport I think also has a huge advantage in Seoul. Granted you can only really compare one capital city to another, but even in contrast with London, Seoul’s subways are much cheaper, its tunnels better-signposted, and its trains wider, newer, and more user-friendly. Buses too.

3) Kind of like the UK, weather is a serious consideration when you’re in Seoul. You really have a take the heavy summer humidity (and the extreme winter chill) into consideration when planning. Just as you have to plan for the morning sun turning into afternoon rain in the UK, or the cold continuing into advanced cold.

4) As I heard numerous people comment, in Seoul convenience stores are actually convenient. It doesn’t matter what time of night you’re wandering around at, there’ll always be a CU or a 7-Eleven open for whatever night nutrition you need. That’s not something you come to expect to see so frequently in the UK. Takeaway chicken, sure, but not plasters or toiletries or fruit. That would be ridiculous. 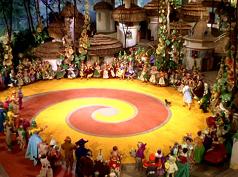 Above: Seoul at night.

I had less time in Seoul than I did in Turin, although I did cram a lot into those five weeks. Keep an eye on the Summer Programmes next year, I’m sure HUFS will be on it. Wonderful place, and wonderful people. But now the time has come to return to what started this blog: old-fashioned non-Korean English Literature. In the next few weeks look forward to third year special subjects, dissertations, required reading, and societies. I’m back, baby!

But for today, 안녕히 계세요!