Hello and welcome to the ramblings of a lunatic. To be more specific, I am an American studying for my MA  in Victorian Literature at the University of Leicester and although it is true that I have a deep admiration for the moon, I can assure you that I have not yet developed lycanthropic tendencies. At least I have not been mistaken for a modern Nebuchadnezzar. 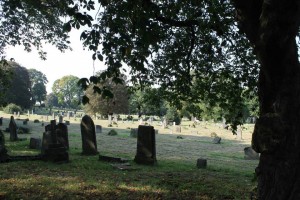 To be fair, this is where you will usually find me.

No, my thoughts tonight are turned to vampires, mesmerism, and dreams. I recently had the pleasure of attending two lectures that explored the Gothic world of Victorian Literature and I hope that my reflections on these occasions might inspire the readers of this blog to seek out similar opportunities for academic improvement. On Halloween I visited De Montfort Hall, a lovely venue nestled beside Victoria Park, to attend Dr. Jane Mackay’s lecture on Bram Stoker and his most famous creation- Dracula. Born to a Protestant family in Ireland in 1847, Stoker was fairly weak as a child and often bedridden due to illness. This he believed caused him to develop the thoughtful and introspective nature that would inspire his prolific writings. Under the influence of his exceptional mother, Stoker’s mind became enthralled with curiosity for the world around him and he became a voracious reader. Eventually he regained his strength and attended Trinity College, Dublin where he earned a reputation in both athletics and academia, graduating with honors in mathematics.

It was during his time at Trinity College that he found the medium to express his literary inclinations by taking up the post of drama critic for the Dublin Evening Mail (which, incidentally, was co-owned by Sheridan Le Fanu). And it was through his position as a drama critic that led him to the most important relationship of his life: his friendship with the actor Henry Irving. Stoker was fascinated with the power of Irving’s skill as a performer and subsequently wrote an enthusiastic review that singled Irving as the greatest talent of his generation. Irving was quite pleased with this review and he extended an invitation to Stoker for dinner. Towards the end of this memorable evening, Irving treated his guests to a recitation that had such a profound effect on Stoker that he was moved to hysterics. From that moment, Stoker dedicated himself to Irving’s success, becoming his stage manager and following him to London with his new bride( in one my favorite bits of literary trivia, Stoker courted the same woman as Oscar Wilde. Their friendship suffered when Stoker won). Stoker’s friendship and admiration for Irving lasted until the latter’s death in 1905. It is the opinion of Dr. Mackay that this was very much a one sided friendship, with Stoker entirely dependent on the will of his beloved idol, whose mesmeric powers were said to have been the inspiration for the character of Dracula. It is interesting then that she did not address the master and slave relationship between Dracula and Renfield in her lecture although I cannot be too critical since the information contained within the hour was so interesting. I would absolutely recommend Dr. Mackay’s lecture series “Literature at Lunchtime” to anyone interested in learning more about their favorite novels. Dr. Mackay is an organized and well spoken lecturer of considerable experience and her enthusiasm for her subject is apparent, which is most gratifying in the case of Dracula. I firmly believe that the horror genre is grossly underrated in terms of its influence on the creative imagination even though you can find many examples of the most respected names in film and literature linked to an early love of horror.

My second event was with the Neglected Victorians, a newly formed group of enthusiasts who aim to draw attention to the lesser known authors of the 19th century. The subjects for discussion were Sheridan Le Fanu’s “The Dream” and Henry Morely’s “New Discoveries in Ghosts.” I was most interested in Le Fanu’s short story as I had already introduced myself to his work with Uncle Silas, a novel to which I can only ascribe the word sinister. When it comes to Gothic Literature the names of Shelley and Stoker cast long shadows and it is easy to miss the extraordinary work of authors like Le Fanu who have the skill to make your skin crawl at their fantasies. It is significant to point out that Le Fanu’s vampire novella came long before Stoker claimed the vampire for himself and it would be a sin to deny oneself the pleasure of discovering a new nightmare. In “The Dream,” a Catholic priest is summoned to the bedside of a perpetual sinner who relates to him a terrible dream where he fell through the floor boards of his stairs into an unholy world of terror. He is allowed to return to earth on the condition that he returns of his own volition. Delirious with the thought of returning to this world, the sinner asks the priest for comfort and advice. Read “The Dream” to discover whether or not a reformation of character is enough to save his soul and to decide for yourself if the world he saw was a dream or reality. You will be delighted with the visual images that Le Fanu is able to conjure with his well chosen words and I have often found that reading his work is almost like a cinematic experience. The article by Henry Morely is also interesting as an informative look into the unique blend of science and the supernatural that pervaded the literature of the 19th century. In his article, Morely attempts to understand apparitions through science, dismissing the specters found in romantic novels, while acknowledging the existence of “sensitive” people who can detect vapors rising from new graves.

It is my sincere hope that my fellow students will take advantage of the University of Leicester’s lecture series to supplement their personal studies and perhaps to discover something new and exciting in the world of Victorian Literature. Look sharp, the following events are this week:

Thursday 21 November 2013 The History of the Book reading group meets at 5:30 pm in Att 1315 to discuss  the article “How Scientific Conversation Became Shop Talk”

Music: “Kiss Them For Me”- Siouxsie and the Banshees

2 responses to “Dracula and The Dream”