Last Saturday, I traveled to Manchester to meet with the members of my Victorian Society module for a walking tour of the northern city historically renowned as one of the leading industrial magnets during the 19th century. I was, of course, excited by the prospect of increasing my knowledge through an exploration of the north of England, which till now has been largely undiscovered country in my experience and as exotic to my mind as India or Africa. I sincerely hope I do not offend any native Mancunians when I say how surprised I was to find in Manchester, a city more beautiful and more metropolitan than I had expected. The images conjured by the imagination when considering the Industrial Revolution are not generally romantic or aesthetically pleasing and it is little wonder that during a time of man-made manufacturing, the artists and poets of that generation turned away from smoke filled skies and steam powered engines to embrace the natural beauty of the earth and the glories of a previous age. However, contrary to my preconceived notions of what an industrial town must look like, I found wondrous examples of Gothic and Neo-Classical architecture with detailed designs set in relief on the stone facade (facade being an appropriate word in the case of buildings with a decorated front and a charmingly practical modern design at the back, hidden from street view). 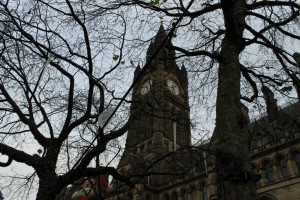 To my immense delight, one of the first stops on our itinerary was the Manchester Art Gallery– home to some of the finest examples of the pre-Raphaelite majesty of artistic expression. Although I will always favor the Impressionists above all others, the vibrancy of color and the full blooded nature of the work of the pre-Raphaelites casts a seductive spell that arrests the wandering spectator and obscures from his vision the neighboring works of 18th century neo-classicism. In 1848 the pre-Raphaelite Brotherhood was founded by the triple barreled, triple threat of John Everett Millais, William Holman Hunt and Dante Gabriel Rossetti who joined together in rejection of the principles of academic traditions in favor of the purity of Medieval and early Renaissance styles. Intentionally controversial, the Brotherhood promoted their revolutionary ideas through public declarations in their self published periodicals and kept records of their debates on the essential qualities of great art. Soon they counted Ruskin among their champions and the Brotherhood increased in the later inclusion of Thomas Woolner, William Michael Rossetti, James Collinson, and Frederic George Stephenson. Although the pre-Raphaelite movement was ultimately short lived, its influence reverberated through time and the works of these 19th century artists are greatly valued in the present day. 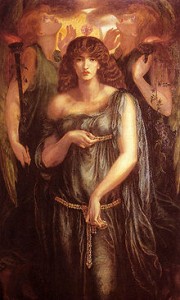 We briefly visited the old town hall, the interior of which was choked with crowds of people surveying the wares of the Christmas-market, so we could not stay long. It was a very busy day in Manchester and so I have little to say on the Christmas-market itself as the aisles were so densely populated that it was quite impossible to move even a few steps without being jostled by passersby or stopped dead in your tracks by people who, having secured their bratwurst and gluhwein, were determined not to surrender their space on the pavement even if it was in the center of traffic.

Next on our tour was the Museum of Science and Industry which hosts an extensive collection of early rail cars and steam engines as evidence of the importance of such inventions to the industry of Manchester. The museum maintains the preserved but inactive train station that would have been regularly used for both transport and industry and, in a clever stroke of creativity, the use of sound effects contribute to a realistic atmosphere when you enter the lower lobby where people would have gone to collect their tickets. 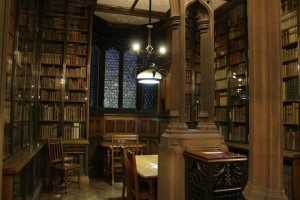 We ended our excursion at the John Rylands Library, another extraordinary sight with its Gothic architecture characterized by groin vaulting (yes, that is what its called), arched windows, and Corinthian columns. Within the interior of the library are examples of 19th century printing presses and an incredible collection of manuscripts on exhibit including one of the earliest fragments of the Bible. The library itself is an exquisitely beautiful bibliophile’s dream with books resting in elegant glass cases that line the walls. All in all I was greatly impressed with my tour of Manchester and would gladly revisit it at a later date to have more time to dedicate to its points of historical interest. It was a wonderful experience. 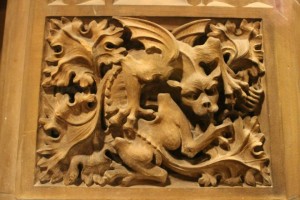 Music: “The More You Ignore Me, The Closer I Get”-Morrissey

Book: The Stones of Venice-John Ruskin