This is an English blog, but I don’t think it’s at all out of place to talk about Dante Alighieri, author of  La Commedia. He may have been a Florentine and an Italian, but he’s probably contributed more to English literature than most writers of English literature can claim. He’s given us terza rima and an endless store of images, metaphors, characters, similes, and worlds which later poets such as Milton, Shelley, and T. S. Eliot have charitably taken for their own. He’s in my dissertation anyway, so I hope this claim is true. But exactly who was Dante, a man who has not only a monopoly over his own name but also, in Italy, the word ‘poet’ itself? 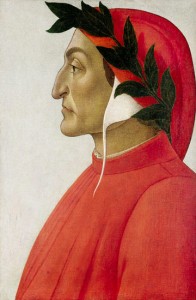 Not a man to spend time gardening.

Dante was born circa 1265 into the city state of Florence, an inner universe of feuding political entities. The biggest issue of his day was which world leader ought to be more powerful. The so-called Guelphs supported the Pope against the Ghibellines, who supported the Holy Roman Emperor. The Guelphs also had two factions: Black and White. Black Guelphs particularly supported the Pope, whereas White Guelphs kind of liked the Holy Roman Emperor. Dante rode the Guelph wave but, like most readers attempting the footnotes of The Divine Comedy, he failed to keep up. In this case he was exiled from Florence, the only city he ever loved.

Dante is famous for his love poetry in the fin’amor tradition, but his greatest achievement was La Commedia/The Divine Comedy, which contains Inferno (i.e. the cool one), Purgatorio (i.e. the weird one), and Paradiso (i.e. the boring one). His complicated and painstaking combination of theology, popular culture, tradition, and a singular power of imagintion created a poetic epic which probably gives you your mind’s eye view of hell, purgatory, and heaven today. Dante was also quite talented at putting people he didn’t like in hell, along with the Minotaur, Cerberus, the Furies, Medusa, and our old pal Satan. In many ways he was actually quite the jerk.

My dissertation discusses, among other things, Dante’s inspiration from the Otherworld vision tradition and its Irish origins, specifically a delightful piece known as the Visio Tnugdali, or the Vision of Tnugdal, also Tnugdalus, Tundale, Tondal, Tundalus, Tondolus, and Tungano. It’s a laugh-a-minute romp through hell starring all our favourite characters, including Phristinus the horrible butcher, Acheron the giant monster, and the big bird that eats unchaste monks and nuns and then impregnates them with snakes. Starring Adam Sandler!

Whether the dissertation will be any good or not I can’t say, but I’ve certainly enjoyed studying the period. If anyone wants to read up more on Dante I recommend A. N. Wilson’s Dante in Love, for which you can find an excellent review on The Ripple’s website, and John D. Sinclair’s bilingual editions of The Divine Comedy. Dante’s the Chaucer and Shakespeare of his country rolled into one, and who wouldn’t buy that willing combination?