For this entry, in honor of the holiday season, we will momentarily leave the world of 19th century studies to pay a visit to the Renaissance and spend a delightful Christmas with Shakespeare. If you require more thoughts on Victorian literature to complete your enjoyment of the season (a need I completely understand), I highly recommend my colleague Richard and his insightful thoughts on the literature of the Victorian fin de siècle. Now on to Stratford-Upon-Avon, land of Shakespeare! Any objections to the presumed history of Shakespeare based on the various theories concerning that elusive playwright’s identity can be directed to the comments section. All thoughts are welcome whether you are on team Edward de Vere or team Francis Bacon (is there any support for Francis Bacon anymore?) As for myself, I will write as I believe that the author of the plays was indeed that same William Shakespeare; actor, playwright, and theatre manager.

I had the pleasure of visiting Stratford-Upon-Avon in the company of my sister, who graciously decided to spend her Christmas holiday with me. In lieu of a traditional family celebration, we chose to spend Christmas Eve in pilgrimage to the home of the famous playwright.  We traveled early in the morning, braving a frosty cold while changing stations at Birmingham, and arrived in Stratford-Upon-Avon to miraculously improved weather that was ideal for our walk through history. One of the many charms that this little town has to offer are the varied and unique shops that are an experience all their own. Only a few feet away from Shakespeare’s Birthplace is The Creaky Cauldron, a wonderful magic shop inspired by the world of J.K. Rowling with some thoughtful nods to other classics of children’s literature. The staff were cheerfully dressed in costumes and welcomed us to a store containing a wand emporium, a sweets counter, shelves of magic kits and healing crystals. The stairs leading to the second floor where special events are held for children was curtained with fur coats and as you brush through this barrier and observe the carefully decorated snowflakes and evergreen trees the mind is instantly flooded with warm memories of Narnia.

Our first stop on our tour was Shakespeare’s Birth Place where the details of Renaissance life are thoughtfully reproduced and lend an air of authenticity to the historical experience. One of the most intriguing artifacts on display in the Shakespeare family home is a window that once adorned the wall of the room in which Shakespeare was born. It has since been replaced in order to preserve the record it contains of the many pilgrims that have sought this hallowed ground. Visitors throughout the centuries  have left their mark by etching their signatures into the glass and careful examination reveals the illustrious names of Thomas Carlyle, Sir Walter Scott, and Henry Irving (whom you may recall mentioned in my earlier entry Dracula and the Dream) among many others. We were delighted to learn from our informative and entertaining tour guide that the Shakespeare family home has an American connection in that it was considered as a potentially valuable attraction by no less than the greatest showman on earth, P.T. Barnum. When the property went up for sale in the 19th century, Barnum was a serious contender for ownership and intended on transferring it to America. Thankfully for England, this was the inspiration necessary for the creation of the Shakespeare Birthplace Trust which successfully raised the funds (with some help from Charles Dickens) and rescued Shakespeare from a life with the circus. The heart swells with pride when an American recognizes the value of British treasures and it pleases me to be a part of that grand tradition. 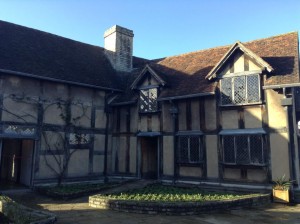 There is a Shakespeare born every minute…hopeful thought.

Next we visited Nash’s House and New Place. Nash’s House belonged to Shakespeare’s granddaughter Elizabeth Barnard and her husband Thomas Nash and resides next to the location of New Place, once the second largest house in Stratford-Upon-Avon and home to Shakespeare at his most prosperous. It is thought that Shakespeare may have composed his later plays such as The Tempest on this site. The ground floor of Nash House was decorated with ivy and mistletoe in full Christmas splendor. The upstairs floor featured an exhibition on the top ten favorite Shakespearean characters and while I was disappointed to see that Richard III did not make the final list, I relished the opportunity to challenge my sister with Shakespeare trivia (can you name the Shakespeare play that features wrestling?). Another benefit of this exhibition is the chance to see props from productions by the Royal Shakespeare Company and original storyboards from Kenneth Branagh’s triumphant cinematic realization of Henry V.  In the knot gardens of Nash’s House, we found impressionistic sculptures and enjoyed the game of trying to decipher which of Shakespeare’s plays each sculpture was meant to represent. We followed this with a visit to Hall’s Croft; the home of Shakepeare’s daughter Susanna and her husband Dr. John Hall. Interestingly, this house was often let to various tenants throughout the years including Josephine Macleod and Anthony Quayle. 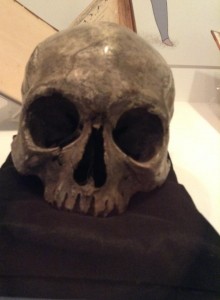 We went further down the road to Holy Trinity Church, the site of Shakespeare’s grave, but, unfortunately, we found it was closed to visitors due to services in progress. Still, it was gratifying to admire the architecture of the church and to roam the adjacent cemetery. Beside Holy Trinity Church runs the River Avon, swollen from the rain storms of the previous night. It was a beautiful sight to see the water rushing by in the direction of the Royal Shakespeare Company, its tower gracing a blue and cloudless sky. Our time was running short so we turned in the opposite direction and followed the long and winding path to Anne Hathaway’s Cottage and Gardens. Although the journey was more than was expected, we were enchanted by what we found. Lauded as the most romantic location in Stratford, Anne Hathaway’s Cottage is surrounded by a lovely garden that includes flowers, vegetables, and orchards. We were shown the room where Shakespeare courted Anne Hathaway as well as the remains of what was once known as the “courting bench.” It was alleged by a previous owner to have been the original furniture on which Shakespeare and his future wife would have spoken with one another. In actuality, the bench originates from the 17th century , but enough visitors believed the story that little remains of the replica since the previous owner allowed them to chip off a souvenir, for an additional price, of course. Remarkably, the cottage had been maintained by the same family line until the 19th century when the property was acquired by the Shakespeare Birthplace Trust and it was here where we learned more about family life in Anne Hathaway’s time. We were shown square wooden dinner plates which were individually owned by each member of the family, some even marked with their owner’s initials, and which were often licked clean. Apparently it is from this tradition that we get the expressions “good square meal” and “to lick the plate clean.” As to the relationship between Shakespeare and his wife, traditionally it is not considered a happy one given their age difference, the unexpected pregnancy that hastened their marriage and their separation while Shakespeare was in London. However, Anne’s devotion to her husband can be seen in her decision to continue to sleep in their marital bed after her husband’s death. Whatever history’s opinion may be, I think it can be understood that, even if it were for only a short time, there was once genuine love between the playwright and his wife. 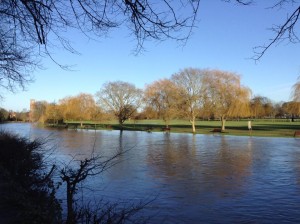 Music: “Blow, Blow Thou Winter Wind”-Music by John Rutter, lyrics adapted from As You Like It