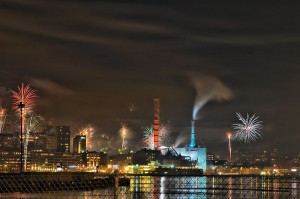 New Year’s resolution: fireworks. That is all.

Because I consider myself quite the expert on self-improving other people, I’ve compiled a list here of five suggestions for Leicester students who want to try something new this 2014, or indeed prospective Leicester students who may want to be aware of the new things they could be doing. Some are big, some are small, but all come with my hearty stamp of recommendation. Let’s take a look, shall we?

1) Instead of going to see a film at the Showcase de Lux or the Odeon, perhaps considering making a trip to the Phoenix cinema not far from Leicester station. At the Phoenix you’ll find a much more interesting selection of films both classic and brand new and you’ll throw some funding into one of the city’s more unique entertainment establishments. The Phoenix often screens award bait that the other two cinemas miss, as well older films which you’re unlikely to have ever seen on the big screen. Why right now it appears we have Mary Poppins, Kes, and Night of the Hunter rubbing shoulders with 12 Years a Slave, All is Lost, and The Wolf of Wall Street. Eclectic.

2) Did you know most University of Leicester students go their entire degree without ever visiting the Curve Theatre? Hard to believe, I know, but it’s true. Or least I assume it is. Even if the opposite is true, that’s no excuse for you to go against the grain and not go.  I saw The Lovesong of Alfred J Hitchcock there, for example. Chicago‘s on right now.

3) Join a society. Obvious one really, but entry to societies does not begin and end in the autumn semester. 28th January is the Refreshers’ Fair, where all the most dedicated and cool societies return their stalls to the Students’ Union and ring in the new members. Of course you can sign up and pay to enter a society at any time of the year, but it is easiest when they’re right there in front of you. If you’re not in a society, why not? It’s an excellent way to make friends and influence people and eat curry.

4) Go to East Asia. Now is the time to be taking advantage of the University’s Summer Programmes, which offer schemes in China, South Korea, and Taiwan over (obviously) the summer. You can read about my experiences at HUFS in Seoul on this very programme at this very blog. Korea, that’s quite a large New Year’s resolution, isn’t it? But it’s one that you will in no way regret making.

5)  And the most immediate, most pressing, most vital New Year’s resolution of all?

Pass your semester one exams. Do your best, everybody!