As an additional treat to my Christmas holiday, I received a new guest named Flat Stanley in the mail. For those who may not be familiar with the whimsical paper character, Flat Stanley originated in 1964 in a series of books written by Jeff Brown and illustrated by Tomi Ungerer. It chronicles the adventures of a young boy who is flattened by a falling bulletin board and improvises a bright side to the tragedy by taking advantage of his new (or lack of) shape to mail himself to unique places. In 1995 a Canadian school teacher decided to follow Flat Stanley’s example by creating the Flat Stanley Project to encourage children to create their own Flat Stanley and record their shared experiences with him through journals and photographs as well as exchanging him with other students participating in the project. The project has proved extremely successful among elementary school teachers and has only grown in popularity throughout the years as a fun way for children to engage with literature. Unfortunately, Flat Stanley was not a part of my childhood, but since first hearing of the project I have held a high regard for the concept. You can imagine my delight when I was informed that my little cousin had chosen to include me in her class project so that Flat Stanley could travel to the exotic island of Great Britain. 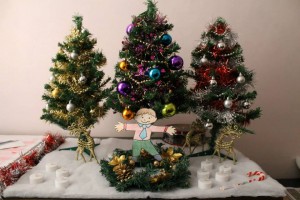 My instructions were that I was to treat Flat Stanley as a guest for four days and to record our adventures in a journal. I was also encouraged to include photographs or post cards for a more creative touch. Flat Stanley arrived too late to see London, but luckily there are sights to see in this lovely city of Leicester and I am only too happy to share them. For our first day together, I invited Flat Stanley to join me in a visit to New Walk Museum, a wonderful free to the public attraction near the city centre. Flat Stanley was very excited to see dinosaur fossils on exhibit and to learn about the differences between land and sea dwelling creatures. Because Great Britain is surrounded by water, it is naturally unique to see marine dinosaurs on display like the plesiosaur and the ichthyosaurus, which was apparently the first complete fossil discovered in the nineteenth century and somewhat resembles a dolphin. There is also an impressive display of a cetiosaur, originally found in Rutland, that has been exhibited by New Walk Museum since 1985. It has a very long neck and lived on land, and this particular discovery has one of the most complete skeletons of any dinosaur fossils found in the United Kingdom. Also at New Walk Museum is the Attenborough collection of Picasso ceramics as well as a gallery of paintings by local artists. And what is perhaps my favorite exhibit: the mummies of Ancient Egypt. There are many interesting artifacts in this exhibition including canopic jars, that once held the internal organs of the buried, and a pair of mummies who, in life, were brother and sister. Leicester has an interesting connection to Egypt in that Thomas Cook, founder of the famed travel company, used Leicester’s Campbell Street train station (it was replaced by the current station in the 1890’s) as the starting point for tours to Egypt in the 19th century. 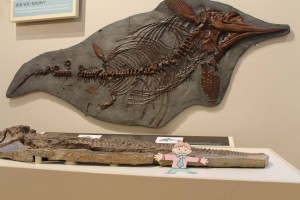 Seen with an Ichthyosaurus

Next we traveled to the Guild Hall to see the temporary Richard III exhibit which will be moved to the newly planned museum over the car park where he was found. The Guild Hall was the original town hall of Leicester with parts of its architecture dating back to the 15th century. It was also a public library and later a police station, where criminals were held in cells on the ground floor. It is great fun to watch guests peer through the cell door and turn on the lights only to jump back in surprise when their gaze is met by the wax figure of a 19th century criminal. The Guild Hall is also an entertainment venue where performers regularly appear. We then visited Leicester Cathedral, a beautiful example of Gothic architecture which may have even greater significance if it is decided that the remains of Richard III should be interred there. It was still decorated for Christmas and Flat Stanley enjoyed viewing the stained-glass windows and stone columns of the interior. He even signed the guest book. 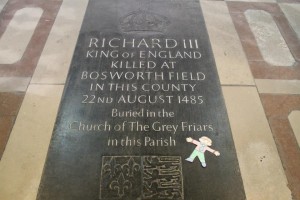 Flat Stanley develops an interest in the last Plantagenet.

Finally, we visited the city centre so Flat Stanley could compare the different stores and enjoy a bit of shopping. We spotted a street performer walking on a tightrope and playing the violin. There was also a small carnival with a variety of rides decorated with blinking multicolored lights and the greatest joy at all was the charming Sweet Shop. The lady who ran the stand was very kind and welcomed Flat Stanley to have his photograph taken with a lollipop that matched his height. Red and white striped peppermint sticks, bags of popcorn, rainbow lollipops, pink and blue candy floss, and vines were enchanting to the senses and after we had taken our photographs, Flat Stanley took a large bag of candy floss (or cotton candy as it is called in the US) and was thoughtful enough to share it with me. So ended my adventures with Flat Stanley and as he makes his way back to the United States, I wish him only the best in his further adventures through the post. I am very grateful to my cousin for including me in her project and I will miss my little paper friend. 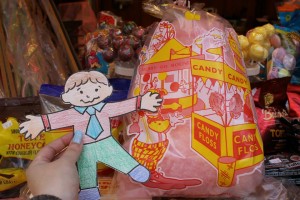 Flat Stanley with the greatest gift of all.

Music: “Around the World”-Daft Punk