Last week I had the pleasure of attending SPELL’s Short Story Reading Group which featured Edgar Allan Poe’s “The Tell-Tale Heart.” It was a wonderful experience revisiting “The Tell-Tale Heart” as I had not read it in many years. It is odd to realize that this masterpiece of horror fiction is quite simple in execution; compared to the detailed descriptions and opulent language that is characteristic of most Gothic stories, Poe’s sentences are often short and repetitive. Remarkably, the original tale has survived all these years without losing its potency and I developed an even greater respect for a man whose skill with words continues to conquer the imagination of his readers. One thing that struck me as wonderfully unique about the structure of “The Tell-Tale Heart” is the reliance on sound and rhythm as a means of conveying terror to the reader. With the exception of the hateful eye of the unfortunate victim, there is an absence of visual descriptions which emphasizes the use of sound. It is an accidental sound that wakens the old man and for over an hour, he sits in the darkness listening for the sound, and trying to calm his fears by desperately seeking a reasonable explanation. It is a brilliant use of an experience that everyone can relate to and now that we can identify with the character, we are treated to the wonderful image of a watch wrapped in cotton, the soft beating of his heart. Then of course, the sound of the heart continues to haunt the narrative, even after the old man’s death, with the sentence structure assuming a staccato rhythm that mimics that loathsome sound. I would highly recommend to anyone interested in acquainting themselves with Poe’s work to seek out any audio recordings, preferably read by an excellent actor like Vincent Price or Basil Rathbone. In spite of my familiarity with the famous stories, I must admit that a chill runs down my spine and my mind is made uneasy by the power of Poe’s words when spoken. 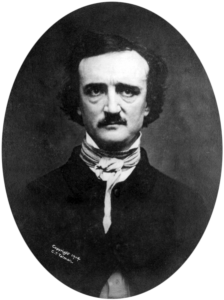 The thing about Edgar is, he’s always good for a laugh.

My introduction to the works of Edgar Allan Poe was through the wonderful film adaptations directed by Roger Corman and featuring such horror icons as Vincent Price, Boris Karloff, and Peter Lorre, and it was love at first sight. Of course, these adaptations were quite liberal in their re-telling of Poe’s classics, but I must give credit to the films that inspired a little girl to seek out the dark world of Gothic literature. Now that I think of it, were it not for this early fascination of the themes recurring in Poe’s works such as premature burial, murderous obsession, and grief over the loss of a beautiful woman, I might never have thought of pursuing Victorian Studies here in Leicester. So let me take the opportunity to express my sincere thanks to both Edgar Allan Poe and Vincent Price for the enrichment of my life.

After a failed military career, rampant alcoholism, and a secret marriage to his teenage cousin who died tragically young, Poe found great success as a writer of horror fiction. Apparently, he was one of the first American authors to maintain his living through his writing and was as innovative as he was popular. To his credit, the world was gifted with the mystery genre and his thoughts on the universe predated the Big Bang Theory by over 80 years. The mystery of Poe’s death has only added to his enduring legend as he was found wandering delirious in the streets, wearing another man’s clothes. The actual cause of his death remains unknown. Also unknown is the identity of the stranger (or strangers) who paid yearly homage to Poe’s grave from 1949-2009 by leaving half a bottle of cognac and three roses on his final resting place. Elements worthy of a Poe story, indeed.

I wish I had more time to reflect on my love of Poe’s work; however, like many of my colleagues, I must complete an essay before the end of this week. So farewell for now and I hope to resume my blog entries soon. 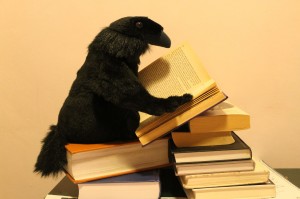 And will I ever slumber deep, escaping this exhausting chore?
Quoth the Raven, “Nevermore.”

Remember to join the fun and attend The Short Story Reading Group hosted by SPELL! All meetings will be held in Attenborough 1315 at 5pm.

Book: The Fall of the House of Usher-Edgar Allan Poe

One response to “Edgar Allan Poe and The Tell-Tale Heart”