Detective Fiction: And Then There Were None

Posted by Richard in English on February 1, 2014

Go into any Waterstones, W H Smith’s, or [other bookshops not provided due to reasons of duopoly] and I’m sure you’ll agree that the general impression is that books nowadays have only two possible themes: early modern historical fiction or crime fiction. There might be a slight chance of finding a book about Nazi Germany. These being so popular, it is naturally quite appropriate to scorn them with a hearty nasal scoff before returning to your leather-bound Herodotus and asking Jeeves to bring in a glass of the world’s oldest brandy. But looking at the matter from an alternative angle, surely there is nothing so deserving of study as the most popular genre of literature in the world? That’s where the Detective Fiction module comes in.

Detective Fiction from Sherlock Holmes to the Second World War is a Special Subject which looks critically at that most scoffed-at of genres, the crime novel — or more specifically, the crime novel before it became the crime novel, back when it was the far less muddy detective novel. From its origins with Edgar Allen Poe’s C. Auguste Dupin (and Linda was just talking about this very author) and Wilkie Collins’s The Moonstone to the eternal Sherlock Holmes (no link necessary), then later the Poirot and Marple of Agatha Christie, detective fiction has been one of the most influential movements in literature. And outside of literature. How much of British tourism has been shaped by Sherlock Holmes pubs and Agatha Christie pilgrimages? How many TV shows owe their plots to detective fiction trailblazers many decades or even a century before? How many holiday hours have been spent nose in detective novel? How many trees have died to fill the waiting rooms and B&Bs of the world with musty wads of mystery paperback? 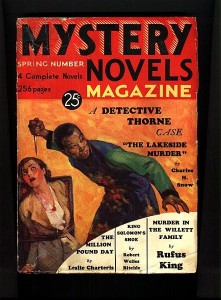 And what about this guy? Oh.

We all enjoy them, so why not study them? Detective novels have a reputation for being pretty shallow, full of stock characters and stock motives. So? You can learn a lot from stock. It really adds flavour to vegetables. And when a novel breaks the mould as the authors of this course did, that’s when things get really interesting.

The module is assessed by 5000-word essay, just like my 1890s module was last semester. I also read Sherlock Holmes in that module, so that makes me a prime suspect for someone who has no excuse not to know their Speckled Band from their Five Orange Pips. Another benefit of this module is that there are countless absolutely first-class film and television adaptations of the greatest stories. With Holmes for example, there are so many Hounds of the Baskervilles it’s a wonder that the great detective wasn’t eaten alive as soon as he arrived at Dartmoor.

That’s enough from me. I’ll keep you all informed on any later developments in the case.