It had to happen some day. The Victorians had to shake off the shackles of respectability and give in to the social forces of modernity. They had to cast away their inhibitions and go skinny-dipping, and so forth. This is where I come in and point out that, yadda yadda yadda, the Victorians weren’t so different, blah blah blah, the common view of the Victorians and their prudery is largely a misconception, etc. etc. etc. We all know that the view of history given by Disney cartoons and Virginia Woolf might be a little bit slanted.

Victorian to Modern: Literature 1870-1945 covers the books that were actually released during this period; it is a time which contains the tail end of Queen Victoria’s reign all the way up to the Second World War, so students can judge for themselves exactly why we see these pizza slices of history — the Victorian period, the Edwardian period, the First World War, the Interwar period, and the Second World War — as such different worlds.

I don’t think many people are going to find the authors particularly obscure: Hardy, Wilde, D. H. Lawrence, Joyce, Woolf, Mansfield, T. S. Eliot, Orwell. These are big guns in literary history. Less famous are the so-called ‘Daughters of Decadence’, the New Women writers of the fin-de-siècle whose names have not become ubiquitous, but are increasingly seeing critical attention for their groundbreaking content. In the bibliographies of the names above we see works which deal, often at an avant-garde level, with issues and techniques that would become commonplace in our modern world. I’m talking about overt sexuality, homosexuality, feminism, psychology, the stream of consciousness, marriage and divorce, the nature of art. Not that such things had never occurred to the human mind before 1870, but the period sees their renaissance as themes of discussion. 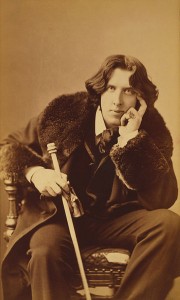 Did Wilde know how many blogs would link this photograph?

The module is exam-assessed in a way much similar to Medieval Literature and Romantics and Victorians before it, with unassessed presentations in seminars. Students who consider the older texts on previous courses just a bit too distant might find themselves more at home with these authors, who write in a world much more like our own. Now I quite like the medieval side of literature, but even I have a weakness for Wilde, the fin-de-siècle, and Orwell. It’s a fascinating period in which we’re finally able to see authors commonly in photographs or even hear them in audio records. And if you want to become part of the English Literature cognoscenti, you just can’t tiptoe around Modernism forever.