I collect quotations that seem to me to have some merit, and in the past I’ve been known to share some particularly poignant ones. Today I’m going to dip once again into my collection and extract some of my favourites. They come from various sources, although today I’m keeping to the Early Modern period and beyond. Much wisdom is contained in these fragments (except the last one), so read them well.

‘I felt that if Tennyson had got on a horse and ridden twenty miles, instead of moaning over his pipe, he would have been cured of his sorrows in half the time.’

‘Electors of Wareham! I understand that some evil-disposed person has been circulating a report that I wish my tenants, and other persons dependent upon me, to vote according to their conscience. This is a dastardly lie, calculated to injure me. I have no wish of the kind. I wish, and intend, that these people should vote for me.’

‘Then with a slow incline of his broad breast,

Forward he stoop’d over the airy shore,

And plung’d all noiseless into the deep night.’

‘The story of the miser, who, from long accustoming to cheat others, came at last to cheat himself, and with great delight and triumph picked his own pocket of a guinea to convey to his hoard, is not impossible or improbable.’

‘There are certain common privileges of a writer, the benefit whereof I hope there will be no reason to doubt; particularly, that where I am not understood it shall be concluded that something very useful and profound is couched underneath; and again, that whatever word or sentence is printed in a different character shall be judged to contain something extraordinary either of wit or sublime.’

‘A Dutchman is a lusty, Fat, Two-legged Cheese Worm. A creature that is so addicted to eating Butter, Drinking Fat Drink and Sliding that all the world knows him for a Slippery Fellow.’

The Dutch Boare Dissected, or a Description of Hogg-Land (1665)

No offense meant by that last one, of course. My feelings on the Dutch are warm, but we have to allow for the turbulent nature of the times. 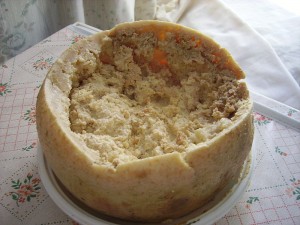 Perhaps the author would feel more at home with casu marzu, the Sardinian maggot cheese?