Yesterday after a particularly enjoyable discussion on the poetry of Christina Rossetti, our instructor mentioned that Ralph Fiennes’ The Invisible Woman was playing at the Phoenix Cinema Art Cafe Bar later that same evening. This is a film I have long been anticipating due to its relevance to my collection and study of 19th century literature as it tells the story of the scandalous affair between the famed Charles Dickens and an eighteen year old actress named Ellen Ternan. Further incentive to venture out and see the film on that night was its introduction by actress Joanna Scanlan, known for her work in The Thick of It, who plays the cruelly treated wife, Catherine. I was very fortunate to hear of this screening because, to my surprise, the other cinemas I had searched had only listed the film on a very limited release. I had assumed that because this was a British production it would have received a much wider release, but I am told that, outside of London, it is difficult to find independent films. The situation seems to be much the same in the United States where every major city is crowded with burgeoning culture from the elite to the off-beat and yet only an hour away, the population must subsist on mainstream entertainment. As such, although I am an avid film fanatic and amateur historian, I find myself rarely compelled to visit the cinema as I much prefer to wait until the films that intrigue me are released on DVD or online rather than invest in a pilgrimage to see the latest critical darling in the theater. The Phoenix Cinema Art Cafe Bar is a refreshing exception to this unfortunate trend and after visiting this oasis for intellectual stimulation, I find it is well worth the high praise given earlier by fellow blogger and literary scholar Richard. It is a miraculous combination of new art-house cinema, re-screened classics, and even an education resource and all at very affordable costs. It is the sort of place I had always read about with envy as I imagined all the savvy film students waiting before midnight features or in between double features networking the crew for their next film and discussing their respective geniuses. 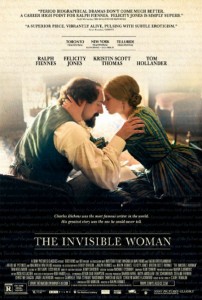 The story of The Invisible Woman is not a pleasant one to unfold as it explores an aspect of Dickens’ life that strongly contrasts the humorous and charitable storyteller and literary titan with the man made so unhappy in his marriage that in addition to having a mistress, he separates from the mother of his ten children by issuing an humiliating public statement, and further alienates her from her family. There is a particularly heart-wrenching scene where Catherine (played by Joanna Scanlan) is made to present Ellen with a gift from her husband: a bracelet meant for his mistress that was mistakenly sent to his wife. To give credit where credit is due, the script does not offer excuses to justify Dickens’ actions and although we are given scenes which show that their relationship is distant there is no evidence of any animosity between them. Towards the end of her life Catherine entrusted old love letters from Dickens to her daughter as proof that he had once cared for her. Whatever her faults may have been, she did not contradict his offensive remarks concerning their marriage nor did she ever publicly defend herself. Scanlan’s portrayal of Catherine is sensitive without making her a martyr and she maintains her dignity and composure until the final separation breaks her heart. As an actor, Fiennes is, as always, very engaging and his introduction as the great writer is wonderfully entertaining as we witness Dickens rehearsing and performing Wilkie Collins’ The Frozen Deep. Such scenes are milk and cream to me as I love viewing thoughtful recreations that give a nod and a wink to the audience while the performers lose themselves in the fun. It is during this production that Dickens first sets his eyes upon Ellen and through a growing friendship with her theatrical family his desire for her deepens. The divine Kristin Scott Thomas provides some of the most provocative moments of the film as Ellen’s protective mother who gleans Dickens’ interest in her daughter before Ellen even realizes it and is faced with a terrible dilemma. Her maternal instinct compels her to defend her daughter’s reputation and yet the potential security that could be gained  by an alliance with a man as powerful as Dickens seems the only option for Ellen’s future since she is unfortunately lacking in the talent to maintain her career. With Mrs. Dickens and Mrs. Ternan we are made to feel the absence of choice that burdened the lives of many 19th century women even as the world was beginning to change with more vocal protestations against the abuse of masculine power.

Now we come to the Invisible Woman herself: Ellen Ternan (Felicity Jones). I wish I knew who to blame for how unsatisfied I was with this characterization. I believe the purpose of this film was to tell the story of a woman whose life had been a carefully guarded secret and to give her a voice. Yet I feel that after seeing this film I know less about her than I did going in as she seems to be a vacant observer of her own life. Perhaps this is because I expected the film would feature a forbidden love between intellectual equals that transcended societal convention, but the relationship between Dickens and Ternan is nothing if not that of predator and prey. His decision to introduce Ellen to the possibilities of an unconventional relationship through the one that exists between Collins and his mistress is decidedly sinister and rather spoils a later scene where Collins expresses his happiness at his own unusual arrangement. She resists his intentions and Jones is at her strongest when she expresses her outrage and frustration at his callous manipulations. And then she gives in. Why? I can understand how a woman could love the charming man we are introduced to, but I fail to see how she could continue to love the man we see later on. It doesn’t help matters that very few people within this film are permitted to freely express their opinions. I can well understand the reasoning behind the choice to present the film with a strong emphasis on purely cinematic storytelling because it is a daunting task to ascribe suitable dialogue to a man who made his reputation as one of the greatest wordsmiths of the English language. This technique can be very effective and the beautiful shots offered in The Invisible Woman promise great things if Fiennes continues his second career as a director (although occasionally I wondered whether or not he is aware of deep-focus). But the interactions between Dickens and Ellen seem hollow and unnatural as in a scene where Dickens expresses his feelings to Ellen through a reading from Great Expectations. It is an appropriate choice since it is said that Ternan inspired Estella, but as Jones has little that compares with that strong-willed character, I found myself wishing that Dickens and Ternan would realize that like Pip and Estella, they do not belong together.

Fans of period drama will find much to enjoy in this film and it is to the credit of the Phoenix that greater audiences will be exposed to the sort of thoughtful and intelligent film-making that is evident here. Still, I believe that this film would have been greatly improved if Jones had been swapped for Perdita Weeks, who plays her sister in this film, and who seems to have a greater magnetism than Jones. I also could have done without the interfering pastor who extracts a confession out of Ellen regarding her former life which is told in flashback. It is the sort of heavy handed device that reminded me of Chaplin, which shares some qualities with The Invisible Woman in that it has many excellent qualities that elevate it beyond our expectations into something approaching fine art, but in its purpose as an illumination of a previously misunderstood or forgotten personality it seriously falls short. And unless you are inspired to seek out the story of Ellen Ternan in Claire Tomalin’s book, on which this film is based, The Invisible Woman will remain Invisible.