I’ve been putting off this one for a while. Why? It’s hard to explain. Perhaps I feel more comfortable when the authors I’m studying are dead — or long dead. I like the Victorians. They’re dead. I like the Augustan poets. They’re dead. I like the Middle Ages. They’re definitely dead. If you were writing after the Second World War, then you were most certainly alive — and how — in a time when the world was no longer prettified by the handy distancing of historical drama. An anachronistic thought but I stand by it. You may even be alive now. Yes, these are writers who have coexisted with Brutalism, the 1980s, the yo-yo, Twitter. The writers of the Charles Wilson Building Age. 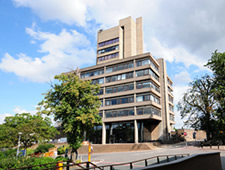 Hailed a great success in … something.

Post War to Postmodern: Literature 1945 – Present Day is a godsend to students who want to study the modern greats such as Angela Carter (The Passion of New Eve) and Salman Rushdie (East, West), who have so far been mostly confined to the Special Subjects while we’ve looked at Beowulf, Chaucer, Shakespeare, Austen, and the like. Naturally, in a module where it’s even harder than usual to hide the amount of writers who have to be missed out in any compression of a period, an angle has to be taken. This time gender, race, and postcolonialism return with a vengeance, along with class, canonicity, national identity, and authority. The texts are selected for their novel tackling of these themes, themes which no student will feel distant from (as perhaps we must admit may be the case with such distinctly un-pressing issues as those of the controversial Old English ring-giver or the quest for the Holy Grail).

So what texts are they? We have Graham Greene’s The End of the Affair, a story of an affair told out-of-order and with considerable emphasis on the process of writing. Typical post war to postmodern stuff, none of ye gudde olde begynnyng myddel and ende of oure fourefatheres lyterature. There’s also Sam Selvon’s The Lonely Londoners, an account of the lives of poor West Indian immigrants in London after the Second World War. Not one for UKIP then, but a founding text in a tradition that we now recognise as vital to British national understanding. Joe Orton’s highly-amusing Entertaining Mr Sloane is among the ranks, distinctive in addition for the author’s own Leicester roots and the University’s ownership of much of his material. Joining these names are poetry A-level kingpins Philip Larkin and Seamus Heaney, as well as serial theatrical bafflers Samuel Beckett and Harold Pinter. I’m currently half the way through the semester, and still to come are Jeanette Winterson’s Written on the Body, Sarah Kane’s Blasted, and Bernardine Evaristo’s The Emperor’s Babe.

I think the meaning of ‘post war’ is fairly obvious in its reference to the privatisation of Royal Mail, but perhaps ‘postmodern’ needs some explaining. Our excellent recent lecture by Dr Carbajal discussed such attributes as postmodernism’s lack of script, its cyclical rather than adversarial relationship with its close sibling modernism, its self-referentiality and irreverence, its democratisation of culture — but we all know where we can find the best definition around for this difficult and slippery concept: The X-Files season five, episode five, The Post-Modern Prometheus. 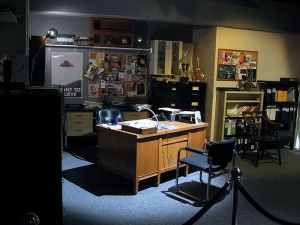 I want to believe … I can write a decent essay on Larkin.

The module is assessed by a 1000-word analysis of a short passage chosen by us (due in March 27th) and a 3000-word essay about texts on the module. Unfortunately, the mark scheme doesn’t allow for doing something really postmodern like handing in a restuarant menu instead.