Last Thursday, I crowned a lovely morning with an even lovelier night at the opera. One of the things I most appreciate about life in England is that you are never more than a short walk away from culture and entertainment. Merely a stone’s throw away from the University of Leicester is De Montfort Hall, a wonderful venue that regularly offers a gamut of performances from the best comedians to symphonies, musicals, and operas. I have already enjoyed lectures at this venue so when I learned that, for one night only, De Montfort Hall would be hosting a performance of Puccini’s La Bohème, I knew I had to attend. La Bohème also happens to be on my life list of operas that must be seen so here’s one down. 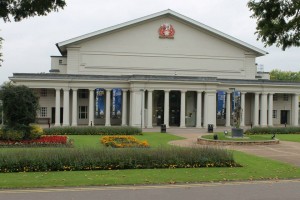 I have always loved classical music. Even as a child I would listen to Beethoven or Tchaikovsky and let my hands fly through the air in a sincere, if far from accurate, imitation of a conductor. Opera, however, was a tough sell even for the most precocious child. Although I applaud the efforts of Chuck Jones and Warner Bros. animators to introduce opera and classical music to children, I have to admit that the famous animated short What’s Opera, Doc? didn’t do much to advance the development of my cultural education. The wink at the end was not enough to overcome the intense misery I felt on witnessing a beloved character endure tragedy and to be fair, I don’t believe the music of Wagner is the ideal choice to introduce to those new to opera (feel free to disagree). 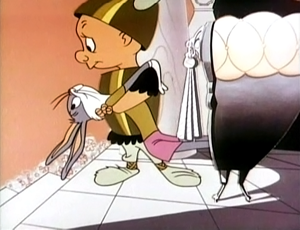 Then I had the great fortune of enrolling in a humanities course for my senior year of high school which had a revolutionary effect on my life and aspirations. In the spring of that year, our class attended a production of Carmen (which is an ideal opera for beginners as the memorable score will be instantly familiar to anyone with even the vaguest understanding of popular culture). I fell in love with the beautiful spectacle and the magnificent performances and it remains in my memory as the finest entertainment I have ever experienced. I have not had many opportunities to attend the opera, but it has become a life’s ambition to one day own season tickets so that I could continue to enjoy art that appeals directly to the soul. 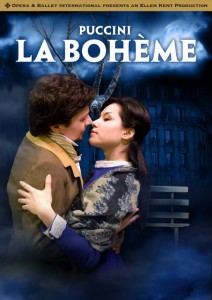 Inspired by Henri Murger’s novel Scènes de la vie de Bohème and with a beautiful score composed by Giacomo Puccini, La Bohème premiered in 1896 and has since become a popular favorite of opera lovers worldwide. The story of La Bohème opens with a scene familiar to all students as we are introduced to the bohemians who are rich in talent but poor in pocket: Rodolfo, a poet; Marcello, a painter; Colline, a philosopher; and Schaunard, a musician. They complain of cold and sacrifice Rodolfo’s manuscript to the dying stove, but their luck changes when Schaunard returns with his wages from an unusual commission: a wealthy eccentric paid him to play his music until an annoying parrot died. After having some fun at the landlord’s expense, the bohemians decide to celebrate in the Latin Quarter and wait as Rodolfo finishes a few lines of an article (no doubt regretting using his words for kindling earlier). While he is alone, he is visited by his neighbor, a seamstress called Mimi, who seeks a light for her candle. A charmingly simple scene follows where Rodolfo and Mimi get to know one another and, as in all opera, fall in love at first sight. The next act sees the bohemians dining in the festive Latin Quarter and features the highlight of the opera in the appearance of Musetta, a vain and flirtatious coquette who has recently left the love lorn Marcello in favor of a wealthy benefactor. She sings “Quando M’en Vo” also known as “Musetta’s Waltz” in an attempt to attract the attention of Marcello while distracting her current beau by sending him to fetch her a new pair of shoes. It is an entertainingly comedic scene that ends in the passionate reunion of Musetta and Marcello while the wealthy patron returns to find himself stuck with the bill. From this high point we soon fall to the third act which sees trouble in paradise as Mimi complains to Marcello of Rodolfo’s jealousy (which is quite a surprise given how easy-going he seems in the first two acts). Rodolfo enters the scene and confesses to Marcello that his jealousy hides his fear for Mimi’s life. She has had a cough since the first act and unfortunately for Mimi this story is set in the 19th century so everyone knows she’s a goner. Even though my interest was more engaged in the combative Musetta/Marcello relationship, I could not help but feel great sadness when Rodolfo and Mimi decide to separate because their love has worsened Mimi’s condition. Although they are reunited by act four, their happiness gives way to tragedy as Mimi succumbs to her illness.

This production of La Bohème was directed by Ellen Kent and featured talent from the Ukrainian National Opera of Kharkiv. Ruslan Zinevych made an attractive and sensitive Rodolfo with a lovely tenor voice although the gentility of his voice was easily overshadowed by the powerful baritone of Vladimir Dragos as Marcello. Elena Dee played Mimi to great effect with a clear, silver voice and great emotional sincerity. Maria Tsonina as Musetta was phenomenal and it was her waltz that I carried home with me.