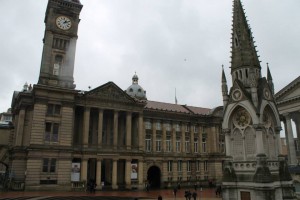 In December of last year, I briefly visited the Birmingham Museum and Art Gallery after a wonderful day viewing the city’s remarkable Christmas Market. I was so impressed by the exhibitions on display that it immediately came to mind when I was searching for the subject of my presentation on the manner in which the Victorians are curated. For the final meeting of my core module, I was required to seek out any museum, art gallery, or author’s home that was relevant to our understanding of the Victorians and to give a short presentation on my findings. Well, this put me in a difficult position because I spent a lovely Christmas vacation visiting museums with my sister and I am anticipating another round of travel when my friend comes to visit me during the Easter break. When my mind was focused on London, I couldn’t justify the expense of travel outside of these times, but then my thoughts turned to Birmingham and it suddenly seemed possible. Since entrance to the museum is free and I happen to be in possession of a railcard, the cost of the train was quite reasonable (especially compared to the price of a train to London!). 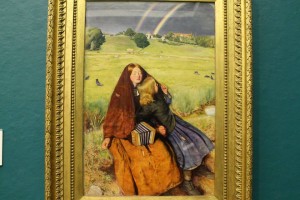 I must have a very trustworthy face or perhaps I have managed to blend into English society quite well because, to my particular delight, no less than three people asked me for directions. Thankfully, they all wanted to know the direction of the train station so I was able to confidently point out the right way even though I have only been to Birmingham once before. I even contributed to a survey for a group of school children huddled together in the rain (hopefully, they got a chance to visit a museum afterward). The Birmingham Museum and Art Gallery is located in Chamberlain Square and is architecturally quite impressive with its neo-classical design, Corinthian columns, mosaic tiles, and marble walls. On my first visit, I had spent the majority of my time in the Industrial Gallery which is part of the building’s original structure and contains Birmingham produced china, silver, and iron as well as a beautiful collection of stained glass windows although  on that day their appearance was rather dull due to the rainy weather that obscured the natural daylight. One of the stained glass windows that managed to impress, even with these limitations, was a design of Sir Edward Burne-Jones’ entitled “The Good Shepherd” which also greatly impressed the critic and Pre-Raphaelite champion John Ruskin. 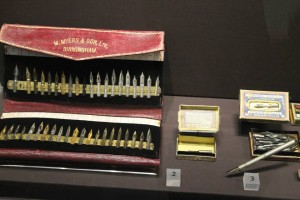 Most 19th century novels would have been written with pen tips made in Birmingham.

The Birmingham Museum and Art Gallery is home to over 2,000 works of Pre-Raphaelite art making it the largest collection in the world. Although the Impressionists will always hold a special place within my heart, the Pre-Raphaelites run a close second with their lush and vibrant colours and their fascination with legends and mythology. The Pre-Raphaelite Brotherhood was begun in 1848 (a year that will be forever branded on my memory as “the year of revolutions”) with a trio of artists who sought to rebel against the conventions of the Royal Academy. The artists were Dante Gabriel Rossetti, John Everett Millais, and William Holman Hunt. Through a concentrated effort to promote their ideals in the world of art and in the publication of The Germ, the influence of the Pre-Raphaelites echoed throughout history and their works are among history’s most valued treasures. The first gallery of Pre-Raphaelite art was dedicated exclusively to one of Birmingham’s favorite sons: Sir Edward Burne-Jones. Originally intent on a career as a church minister, Sir Edward Burne-Jones attended Oxford where he befriended fellow Pre-Raphaelite enthusiast William Morris. They eventually met the much admired Rossetti and it was due to his influence that Burne-Jones abandoned his chosen profession for the life of an artist. Rossetti had little cause to regret the effect of his influence as he recognized the hand of a master in Burne-Jones work. It is astonishing to witness first hand not only the skill and creativity of Burne-Jones’ craft, but also his incredible range and proficiency. In one gallery there were three large scale cartoons intended as a design for stained-glass windows, a grand piano ornately decorated according to his style, and The Star of Bethlehem, which has the added distinction of being the largest watercolor in the world. 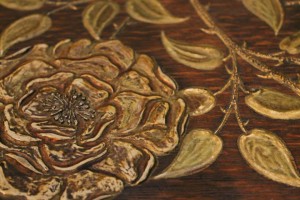 The next two galleries contained works that showcased the influence of the Pre-Raphaelites as I imagine that the majority of works from the original three founding artists are on loan due to popularity. Rossetti’s Proserpine, which features so heavily in the promotional material for the Birmingham Museum and Art Gallery, is also on tour although luckily, I did have an opportunity to see it in December. Representing Rossetti at the moment is a copy of his Beata Beatrix, which memorializes his wife and muse Elizabeth Siddal in a scene from his namesake’s La Vita Nuova. The original painting is in the Tate Britain. This particular copy was begun by Rossetti and completed by Ford Maddox Brown and is distinctive for its reversal of colouring in the the white dove and the red flower. 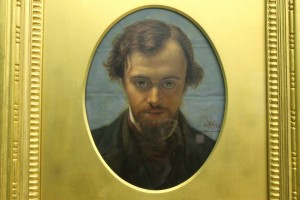 “Look into my eyes…” Portrait of Rossetti by William Holman Hunt

I have had the privilege of visiting art museums in several countries and I must admit that the Birmingham Museum and Art Gallery is one of the most admirable I have ever seen. In addition to the splendor of its Pre-Raphaelite collection, there is currently on exhibition a wonderful gallery devoted to the development of the city of Birmingham from its Roman origins to the present day. Its representation of the 19th century was excellent and touched upon all elements of interest from culture, trade, religion, workhouses, reform, women’s suffrage, its dark connection to the slave trade as well as its redemptive status as a principle fighting ground for the abolitionist movement. There are many interactive displays for both children and adults from the technological to the tactile (could I resist playing with a model town and organizing it according to my design?). 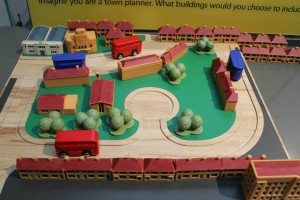 But most impressive were the personal testimonies from the residents of Birmingham connected with the exhibits. This addition makes plain that Birmingham is a city that appreciates its history, both famous and local, and it was greatly moving to hear genuine sentiments of recent memory emanating from the phone box rather than an actor’s poor attempt to capture a time long since past.  Visiting Birmingham and its incredible museum was a truly wonderful experience and I hope to have another chance to visit it again as it ranks very high in my estimation. England is much greater than its capital city and I sincerely wish to discover as many treasures of beauty and history as this country has to offer. 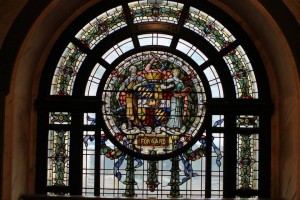 Forward! On to more adventures!