Last week I set up a competition to decide my favourite book out of all those I read in the Autumn/Winter Semester. It started with a list of five, ranging from Medieval Visions to Scientific Romances. At the time, it appeared to be the right thing to do. We make lists all the time, don’t we? Isn’t sorting things we like or hate into lists the principle our internet is based upon? Somehow, it just doesn’t seem academic. All this Postmodernism must be getting to me.

Today, I’m in the mood for Tennyson. 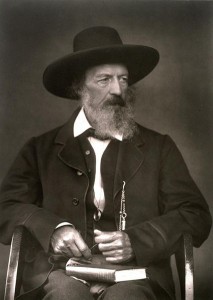 To strive, to seek, to find, and not to shave.

I was surprised when I first read In Memoriam A.H.H., Tennyson’s circumlocutory one-hundred-and-thirty-three-canto exploration of the human relationship with death. I mean, it sounds terrible. I’m being purposefully glib, but it sounds like exactly what those monochromatic Victorians would write, right? But I was wrong, and stupid. Tennyson had two decades to collect his feelings on the early death of his friend Arthur Henry Hallam, the emergence of deep time, the reality of species extinction, the doubt over the benevolence or even existence of God. The product of this emotional brewing is a poem that can be read as a chaotically interconnected whole or as one hundred and thirty three perceptive musings. No easy answers, no patronising conclusions, but a personal search for vital truths that may not even exist. If you’re pushed for time, I recommend the canti LIV-LVI and CXXIII-CXXIV.

But now I must present my selections for the second semester. There were more texts to choose from and I have to admit I found the choice very difficult, especially while wracked with doubts over the entire list philosophy. Nonetheless, here it is.

1) Sir Arthur Conan Doyle, The Adventures of Sherlock Holmes (1892): The first and best collection of short stories about the world’s greatest detective. ‘A Scandal in Bohemia’, ‘The Red-Headed League’, ‘The Five Orange Pips’, ‘The Speckled Band’ — I’m trying to list the best stories but I can see that I’m just listing them all. Facinating not only for Doyle’s deft plotting but also the things Doyle probably never intended to tell us about himself and about Britain.

2) Oscar Wilde, The Picture of Dorian Gray (1895): Like opening a bag of potpourri in a small airless room, Dorian Gray is both intoxicating and eyewatering. It’s available in numerous versions with numerous different levels of controversy and intrigue, but all of them tell a Modern Gothic tale in which the reader is just as complicit as the characters in acts of disturbing amorality. We all love Wilde’s comedies, but his hand worked magic on the horror genre.

3) Agatha Christie, The Murder of Roger Ackroyd (1926): Don’t look it up, or you’ll be spoiled. It’s still an excellent murder mystery which doesn’t fall apart when you know the culprit, but you might as well find out the old-fashioned way. Spoil yourself for Game of Thrones instead.

4) George Orwell, Coming up for Air (1939): Orwell’s novels outside Animal Farm and Nineteen Eighty-Four are often disregarded or simply unregarded, but as far as I can see this is often because the unsuccessful regarder has a capital-A Agenda. Coming up for Air is a pathetic rendering of lost worlds that is extremely self-aware and, of course, intensely Orwellian. Unlike most entries on the list (and all entries on last week’s list), it’s also very funny.

5) Joe Orton, Entertaining Mr Sloane (1964): I enjoyed this play a great deal even before I saw Douglas Hickox’s hilarious screen adaptation and learnt that Leicester keeps the Joe Orton Archive, so now my appreciation has a great hill from which it can base its operations. What a strange metaphor — but what a superb piece of theatre. Merciless, transgressive, a real original, and a testament to the power of one very short life.

The winner will be announced next week, but we all know the real winner is the smooth, refreshing taste of, uh, no-brand cigarettes. 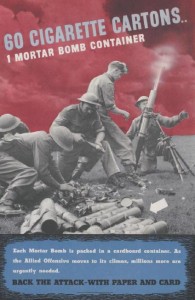