As I prepared to face a lonely Easter in a house oppressed with silence (and an imagination inclined towards the dramatic), I received a message from a friend inviting me to join her family in an excursion through the most notable attractions in Leicestershire and Northamptonshire. I consider myself very lucky to have made a friend who is so thoughtful and considerate and it was kind of her to remember me. So I was delighted to accept and eagerly anticipated another chance to explore new places. 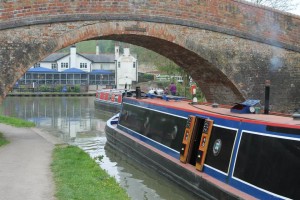 Traveling down the canal, under Rainbow Bridge…

We began our tour with a visit to Foxton Locks which are a series of locks that form a staircase which allows boats to “climb the hill” and join with the canal. It may be a common sight to some, but I had never seen anything like it before and I felt it was incredibly exciting to observe the boats rising up with the water. There is something indelibly romantic in the imagery of boats and the ones traveling along the canal did not disappoint with their brightly colored exteriors and equally colorful characters captaining their respective vessels, each with an adorable dog as companion, evoking the charm of a Miyazaki animation with their unusual names like Tickety-Boo, Annoula, Georgina, Comfortably Numb, and Elsewhere. The canal locks are actually an invention of the early nineteenth century and, although once threatened by the late nineteenth century addition of an inclined plane to mechanically lift the boats up the hill, the locks have survived the test of time and currently serve as a popular attraction. I have recently discovered the most wonderful word in connection with my growing interest in canal boats: gongoozler. Apparently a gongoozler is a person who is fascinated by canal boats and enjoys walking along the waterside and observing the busy life on the canal. 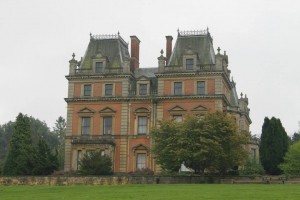 Is it only my vulgar American imagination that views the grand architecture of East Carlton Hall and is instantly reminded of a cross between the homes of Norman Bates and the Addams Family? The house itself is not open to the public but the surrounding area includes a welcoming country park that is free to traverse. The weather was cool as autumn, but signs of spring were in abundance as my eyes spotted little ducklings swimming in a pond and baby rabbits hiding in the shade of a tree, though whether one of those rabbits was the Easter Bunny I couldn’t tell. The charm factor was exponentially increased by my introduction to a little shop that specializes in doll houses. Detailed models of Victorian and Georgian houses with multiple doors and working chandeliers invited admiration and I might have dedicated hours to the perusal of shelves and shelves of miniature furniture and porcelain dolls. 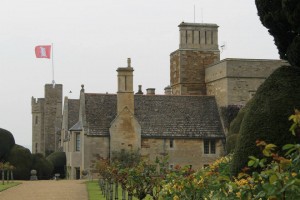 Finally we concluded our tour with a walk through Rockingham Castle, the foundations of which originated in the 11th century by order of William the Conqueror. The castle was held as a royal retreat until it fell into disrepair and its lease was acquired by Sir Edward Watson from Henry VIII. The descendants of Sir Edward Watson have maintained control of the castle ever since, a remarkable achievement even in a country where so many can trace their origins, both familial and architectural, through history. Photographs of the interior were not permitted, otherwise I would have certainly included pictures of the venetian glass chandeliers that were a shocking explosion of red and blue sharply contrasted with the warm neutral colors so often found in 19th century décor. It was in this addition of the castle that I learned of the friendship that existed between the 19th century Watsons and Charles Dickens. It is claimed that Rockingham Castle served as an inspiration for Chesney Wold, the country estate of Sir Leicester Dedlock in Bleak House although to my knowledge there are several homes that make that particular claim. Rockingham Castle is certainly impressive, but it certainly didn’t seem at all gloomy while I was there. The gardens were beautiful with some amusing topiary figures representing a parade of elephants. All in all I had a lovely time acquainting myself with sights that I might not otherwise have seen and I am thankful to my friend, not only for the delightful experience, but especially for the relief of my melancholy and the return of my usual cheerful self. Now back to my essays! 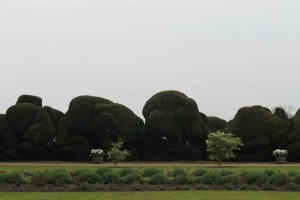 Can you spot the elephants?

One response to “The Simple Things in Life Part II”