Summer by the Riverside

During my sojourn in Leicester, I have made an effort to see (and subsequently recommend) the principle attractions that this wonderful city has to offer. I have been to the Jewry Wall, the Botanic Gardens, Victoria Park, New Walk Museum and Leicester Cathedral. I have shopped at High Cross, taken in a film at Phoenix cinema, explored the Fresh Food Market, and indulged in the heavenly gelato at Madison’s, which is an essential student experience. But in all my wanderings I had yet to come across the River Soar until last weekend. I have seen it featured in the postcards at the Leicester Visitor Centre, but even though I have made it a habit to take a long walk every day, the river was no where to be found. It is true that I could have just looked up the directions on the internet, but where is the spontaneity in that? So when I learned about the Leicester Riverside Festival, I found myself some knowledgeable friends to direct me to that natural enigma. If you have not yet taken the opportunity to stroll alongside the river, I seriously suggest you put down the book and take a walk outside. Or take the book with you. Although the clouds threatened to dispel a day of summer magic, the sun resisted all advances and shone brightly throughout the day. First, we were delighted by the sight of acrobats, dressed as fish, performing on a moving pedestal that was operated by an octopus! 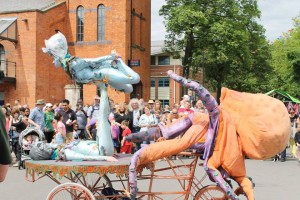 Did you think I was kidding?

It was wonderful to see the crowds of people huddled outside of market stalls, to hear the sound of music floating through the air and to taste some warm sugared donuts. Where I come from, such a fair was once a yearly tradition, but in recent years it has been reduced to overpriced rides without food or music and so it was very nice to see a fair done right. I saw a performance of Morris dancing and, even though I am aware that it has a reputation for being a somewhat lame activity, I was absolutely thrilled to witness an authentically British tradition, bells and all. Up and down the river floated lovely little boats with lovely little names such as Rumble, Jumble, and Fumble. If that isn’t the beginning of a fairy tale, I don’t know what is. 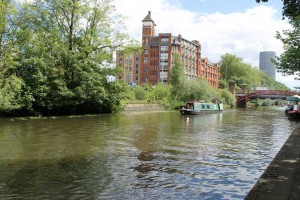 And it is not too late to enjoy this atmosphere of amusement and frivolity. Only today I discovered a similar event on Clarendon Park Road. I saw a beautiful pair of ponies outside of the Emma Brown hair salon and received free samples of curl enhancing lotions! And even now Victoria Park is being concealed by walls in anticipation of a music festival. So much fun and so little time, but plenty to be enjoyed by all. Enjoy the summer! 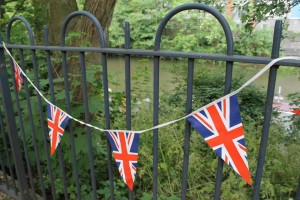 Music: “Why Am I So Romantic”-Lillian Roth