I hadn’t really thought about it with any focus until now, but I’m quite picky about what I like in a book cover. Seeing a classic get a new edition with an awful cover jacket or front cover really angers up my blood. As an English student, I’ve got quite a lot of experience with the kind of covers Oxford, or Penguin, or Wordsworth tend to give their releases. I’ve seen some greats and some hates. Since classic novels are re-released so often, I can discover all of a sudden that to any Waterstones commuter my favourite book suddenly looks appalling. As I said, I’m quite picky. 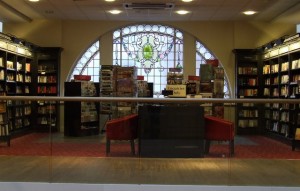 Waterstones can be a stressful experience for me.

The first and most obvious mention is when a film adaptation is released and the next printing of the book gets a glossy photograph cover from the film, or the film’s poster. This is just awful. I have never seen a decent looking book that has a film still as its cover. The only time a book can retain an ounce of dignity in this manner is if the new cover is just the logo of the film, and the logo happens to be very tactful. I have an old Jurassic Park that has a simple logo design, but the film’s logo was taken from the original book’s cover, so that doesn’t count for much.

On a slightly more subtle note: books with photos of people on the front. No. This tends to happen with historical novels. They stick some attractive person staring at a field on the front and you’re supposed to sort of assume that they’re the protagonist. No. This makes even the greatest novel look like Mills & Boon. The Penguin Modern Classics dilute the damage slightly by making the images black and white or sepia.

A lot of Oxford and Penguin editions of classics use famous works of art that thematically represent the text, rather than an actual picture of the text itself. Often these are extremely apt, and I like them. Occasionally they seem to lead the reader to associate a famous character somewhat unreasonably with an 18th century painting of very little relevance, but both Oxford and Penguin seem to have better taste than Wordsworth. Wordsworth use a similar method, but some of their covers look outright crummy. I talk about these publishers because nearly all the books of my degree came from them. They also have a lot of freedom, since most of their titles come from books that were published before books even had covers as we now know them. Publishers have endless fun with Richardson, Defoe, Burney, Austen, Eliot, and so on.

Should we return to the old ways? Answers on a poscard.

I suppose it’s difficult to release a new cover for a book when you don’t have the rights to the famous, beloved original cover. That said, does anyone want a copy of The Great Gatsby without Francis Cugat’s iconic ‘Celestial Eyes’? Nobody does. What about The Godfather? Invisible Man? Anything other than the original cover for these books is a crushing disappointment.

I bring your attention to Stephen King. I do this because his books have seen just about every artistic phase and trend since the ’70s on their covers. Now I haven’t read anything by the master of horror since I started uni, but before uni I managed to finish just about half the books he’d written up to 2010. Unfortunately, I’m too young to have been around when Stephen King’s books had good covers. Most of my King books use simplistic, sparse, and boring designs. I remember his The Dark Tower series by the fairly average CGI tower design rather than the fantastic original paintings. The original cover of The Shining is great; mine is just a dodgy photomontage. Not everyone is necessarily going to agree with me, but for a writer like King I think nothing is more appropriate than the lurid original covers of  Pet Sematary, Christine, Firestarter, or Misery. Yet this kind of cover seems to have gone completely out of style, which is why nowadays you get a Shining with a big cartoon wasp on the cover. Thrilling.

It goes without saying that I have no set requirements for the perfect book cover, just a few stipulations on what to avoid: photos of people, photomontages, not living up to the original, using a film poster, and mistaking minimalism for tact. Oh, and trying to use a quirky stylistic design for a decidedly non-quirky novel — you should see my edition of The Big Sleep.

On some blessed occasions, a book has no one iconic cover, but hundreds. Check out this fantastic compilation of different editions of The War of the Worlds. I think you’d be hard pressed to find one that rises above all the other outpourings of invention. Now that’s bliss.

In an additional note, if you like older books, there’s an excellent supply at Maynard and Bradley Bookshop and Gallery in The Lanes in Leicester city centre. I went in there a month or so ago and got some great deals out of the smoke damaged section.