On Friday 18th July, I graduated from the University of Leicester. I graduated somewhere between 11am and 1pm, in DeMontfort Hall one hundred and one years after its grand opening (and one hundred years exactly after the installation of its impressive organ). We saw honorary degrees given to human rights lawyer Howard Morrison and former head of the NUS Aaron Porter. This was all after a hearty breakfast at the hotel, and it was followed by a largely hearty lunch at Fingerprints, and then in the evening I returned to full heartiness at Barceloneta. It was a hot, sunny day with occasional brief storms. 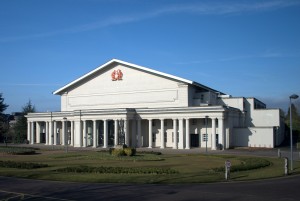 There’s no way there aren’t any mortarboards on the roof.

I’m pleased to say that all my friends have passed, many of them with extremely high grades. Most of us English with a Year Abroad types were even sitting next to each other, so we could whoop for each other in close range from our front row seats. Yet another advantage, if I haven’t stressed it enough, of taking an Erasmus year. Dottore, dottore!

On the less happy side, my student card is currently just for decoration as its large June expiry date means that even the most casual Odeon employee isn’t going to be fooled. I’ve handed in all my library books. I’ve moved out of Regents Court (a.k.a. Goblin Town). I haven’t been seen in the cheap meats section of Morrissons at 9pm for a month. Leicester is as Richard-free as it’s been in quite a while. Well, except for the Third. I’m sure the lessened strain on the city’s gorgonzola imports will be appreciated.

But this isn’t quite the end. I’m here until the end of July, and so I’ll see you next week for my last and greatest blog. Until then:

‘History, not wanted yet,
Leaned on her elbow, watching Time, whose course
Eventful should supply her with a theme’