Back in LE2- student houses

Posted by victoria in English on September 23, 2014

I’ve just woken up to my first morning back in Leicester of my final year- appropriately for my mood, the sun is shining. One thing I did notice about Leicester when I first got here was that the weather is considerably better than back in rainy Manchester…turns out there probably is some truth to the idea that Manchester sits between two lots of hills so that all the rain in the world descends on it on a daily basis, interesting.This is just a bit of an update about what it’s like to come back to Leicester, and to live in a student house.

So: I am living in an area called Clarendon Park, which is where a lot of students choose to live in second year. If you end up living in student halls in Oadby and you get the green bus to campus, as you drive down the row of shops just before you get to Victoria Park, that would be Queens Road, which Clarendon Park Road cuts through the middle of. If you haven’t done that yet, it’s an area of houses just at the back of Victoria Park directly opposite the campus. So once you move out after first year, you usually end up considerably closer to campus, which is great. The sports centre is now a 5 minute walk away, which adds slightly more incentive to actually going, and the option of walking through the park to class makes it a nice stroll before class. The area has lots of students and also lots of young families, with a primary school close by, so it’s a lovely area to be in. 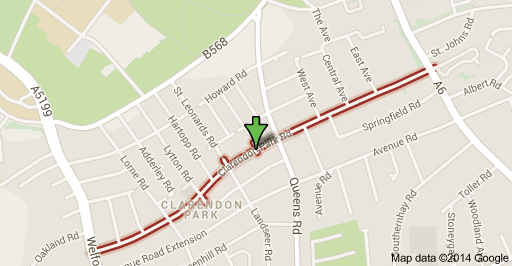 A lot of students live on the roads either side of Clarendon Park Road, particularly the ones which head down to Victoria Park e.g. Adderley Road

There are other areas to live in and particularly if you’re a medical student, it might be more convenient to live on the other side of campus towards Nelson Mandela Park, but people also live in a place called Evington which is just off London Road. I’ve head a mixed bag of reviews about living there, so my personal recommendation would be to go for the Clarendon area if you can.

Student houses are notorious for being hit and miss, although I’ve not really seen any bad ones over the time me and my friends have been living in student houses. The key to this is to make sure you look around and try and think of practicalities as you g0: if it’s next to a main road or a pub, think about the noise; if all the rooms are big with wooden floors, think how cold it will get in winter and you’re reluctant to pay for the privilege of putting the heating on; check the walls for damp patches and the windows for single glazing; try and get a quick conversation with the tenants to see if the landlord/lady is reasonable. That being said, I was on a year abroad last year, so my friend who was still around very kindly managed to get us a house right next door to hers. This meant that when I walked in yesterday, it was the first time I’d ever seen the house. Luckily, my friend had chosen well!

Usually with the houses, there’s one smaller room up for grabs. This can cause some arguments with future housemates, because no one wants to be relegated to the box room. But a word in support of box rooms because I chose it this time round- sure, I have the smaller room, but I also pay slightly less rent over the year, which adds up to about £200 difference over the course of the year. That’s about the cost of a gym membership. Also, it’s a lot easier to make a small room cosy, and I can tell that my little room is considerably warmer than any of the others already. You shouldn’t under-estimate how cold a student house can get! Also, they’re often at the back of the house, so it tends to be a bit quieter, and if you’re really lucky it means you’ll be facing the sun in the morning to get additional warmth. So don’t necessarily turn your nose up at the smaller room, it might work out!

Also, I know that there will be a rush to get student houses, there always is. But I am going to say it anyway- don’t rush into choosing a house for next year! Other universities do have few properties so there is more of a time is of the essence mentality, but there are a lot of places to choose from around the campus, and I know people who didn’t choose a house until about April last year and they still got a good house in a prime location. In my first year we ended up signing for a house in about November/December, and the thing with that is that you’ve only really known the people you’re choosing to live with for a whole year, for a couple of months. That’s not always enough time to see what they’re actually like, so if you can afford to wait a bit, I definitely would.

That’s really what I’ve got to say about student houses. In terms of studying English, and actually many subjects because my Geographer housemates are in the same boat, you should also know that you will get your timetable very late on in the term. I received an email yesterday informing me that my classes will start on the 6th October, which I had no idea about before, and the email also said that I will hopefully receive my timetable by the end of the week. I’m going to spend this time trying to figure out what my dissertation is going to be about, and preparing for the careers festival which I mentioned earlier.

As always, please feel free to ask any questions in the comments section, and I will be back soon with an update!