I live with three Geographers, and we often joke about how you’ll find them in any subject area in the library except Geography because of how many other subjects theirs draws from- especially Human Geography. But you know what, I’ve realised that English is no exception to this, and actually it’s this that makes it so enjoyable for me. No one likes to be bored, and learning about the context books are written in and influences on the author help break up the close reading that English is so well known for, and adds a little variety to the degree. When you study English, you’ll also end up dabbling in:

The English course at Leicester takes you through the history of English, so you look at literature from way back when, all the way up to the present day. This means that each new time period covered involves getting to grips with the historical context of the time. I’m studying ‘Romantics to Victorians’ at the moment, which means I’ve had to go over the French Revolution, because it turns out the Romantic writers had quite a lot to say about it! Having not studied History since year 9, or since I was 14, I often spend the first week or so of a module playing catch up as I read about what was going on in history. And you know what, I love it! A knowledge of history is always going to be a good thing to have.

Descartes, Kant, Hume, Locke…  these are just some of the names that have cropped up whilst I’ve been studying English. Their ideas on things like identity and the formation of the self have been really important for writers and you can see their influence in work that is studied on the course.

I’ve lost count of the time Freud has cropped up as a viable reading of a particular piece of literature. Frustrating as this is for me because I hate Freud, it is interesting to learn about different psychological theories and apply them to texts. In second year in particular there is a ‘Concepts in Criticism‘ module which gets to grip with ideas from other disciplines, including Psychology. I looked at the depiction of trauma in a novel for one of my essays, which included looking at what psychologists had documented as the symptoms of Post Traumatic Stress Disorder to see how these were incorporated into literature e.g. repetition of flashbacks.

Literature is a form of art, so the topics and influences on other art work created at the same time as the text being studied can be important contextual information for analysing the literature. Several lecturers often use paintings in their work to help illustrate their points. 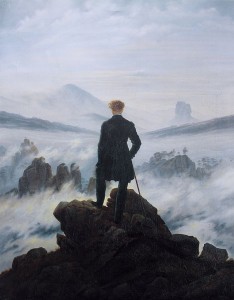 A lot of the writers studied were heavily influenced by religion, which is not to say that it was all mainstream. There’s a real variety in the opinions put across in the texts that get studied throughout the degree, and the discussions about the reality of God, what sin is, what being an individual means, and the relationship between religion and the monarchy, to name just a few strands of thought, are really interesting.

So there we go- you might have thought you’d just be studying a simple English degree, but actually you get to have a go at a few other things as well!