Posted by victoria in English on February 6, 2015

On the 5th February Time to Change, led by Mind and Rethink Mental Illness, encouraged England to take 5 minutes to talk to someone about mental health, as part of a campaign drive to help challenge mental health stigma. Now (as is often the case in real life), I’m a bit late to the party in posting this here, but I was debating whether or not my mental health was a) something I wanted to write a blog post about, and b) whether it was something that would make worthwhile reading. Having finished my internal debate, this post is the outcome… I’m justifying it because I’m going to talk about my mental health experience whilst studying at the University of Leicester, which I hope might be useful!

I’ve split my post in two: the first part will be about my particular experience, and the second will focus on the help I got specifically through  being at Leicester.

First of all I’d like to say that it’s quite a new thing for me to even define my mental health using terms such as ‘anxiety’ and ‘depression’. Looking back I can see that actually both of these issues have been affecting me since I was about 12/13, but I always assumed that it was just me being silly/ part of my personality/ it was a phase I’d grow out of/ I was just being a normal, moody teenager. However, I think that all of these assumptions stem from ideas circulating in society concerning depression, and for me this emphasises the importance of talking to someone- maybe if I had managed to articulate my feelings instead of denying them, I would have been able to find strategies that could have stopped me feeling so awful for so much of the time.

This takes me up to my first year at University. Before I went I was so scared that because of all the change and upheaval, my ‘bad’ feelings, as I called them, (i.e. depression and anxiety) were going to take over and ruin all my fun/ my life in general. As a side note, I think my parents were also quite concerned about what I would be like when I went away, because they’d noticed that I had periods where I was in real trouble. I think this is all the more reason to talk- had I discussed with my parents properly how I was feeling, we could have all discussed frankly what was going on with me and what could be done if the ‘bad’ took over. However, for whatever reason I managed to keep the ‘bad’ at bay for first year, bar a few wobbles, and I had a great first year. Hooray! I celebrated- the ‘bad’ stayed at home, I’ve escaped, I’m free! 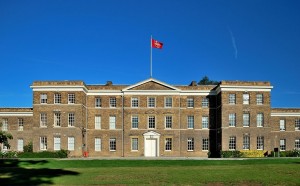 The Fielding Johnson Building- in my opinion the prettiest building on campus- to break up all my talking!

Only that wasn’t the case, because in my first semester of second year the ‘bad’ showed up and took up permanent residence for a good 4 months, bringing along a whole new aspect to play, in the form of panic attacks. The first time this happened I was alone in my student house, and I thought I was having a heart attack. I wasn’t particularly worried, I was just doing my own thing, and the next thing I knew my heart was galloping around my rib cage thinking it was in the Grand National and I was breathing but my lungs seemed to have forgotten how to process air satisfactorily. I sat on the floor in the kitchen, leaning against the wall for support, and thought what on earth is happening to me? It scared me so much that after I’d calmed down I decided to go to my friend’s house. I started trying to explain what had happened, and was mortified as I started to leak (seemingly) all the water in my body out of my eyes. Luckily my friend is brilliant, so they sat with me and let me cry, then talked to me about what was going on and gently suggested that perhaps this wasn’t something that needed to keep happening- perhaps I could talk to someone professional and they could help me. They also told me about their sister, who was also suffering from depression.

This was a new idea for me, and at first it was one I resisted quite a bit. Their sister was also suffering from depression? Suggesting I had depression? As in, this wasn’t just one more example of me being… me? Weird, neurotic me? And this is another reason why I want to encourage talking about mental health: firstly, because it’s a lot more common and affects a lot more people than it first seems, and secondly because when I first realised there might be something wrong with me, I resisted this. I thought I was being stupid, and thinking that maybe there was something ‘wrong’ made me feel worse about myself. But that’s not true at all! If something is having a negative impact on your life then it’s significant, and having something ‘wrong’ doesn’t reflect on you as a person at all. But it took me a while to get my head around that fact. And when I did start to consider that maybe something was wrong, then I told myself off for making a mountain out of a molehill! I’m just a bit down and a bit nervous, I need to just stop it, there are people with actual, serious mental health problems… are the kind of thoughts I had on a loop, that made me feel guilty for feeling bad. Which now I can see is ridiculous and part of the problem, but at the time it just meant I was a big ball of not good feelings!

So that was where I was at in second year, and although I quietly mulled over the idea that maybe this wasn’t the way things had to be forever and ever, I still wasn’t comfortable really acknowledging what was going on with me. So I made my way through second year, and then in my third year I went on my year abroad to Heidelberg, Germany. Again I was concerned my ‘bad’ feelings would follow, but they seemed to be subdued for most of the year. 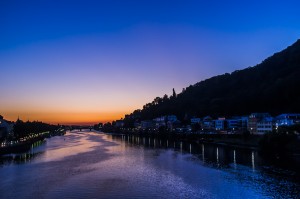 Heidelberg- how can anyone possibly be sad in a place as beautiful as this?! Well, as I’ve learnt, it’s very possible, because something with biological roots doesn’t care where you’re living…

Then several things seemed to happen at once. A couple of months before the end of my time in Heidelberg, I suddenly found myself getting nervous over going to meet friends in entirely unthreatening situations, to the extent that I’d find myself unable to go because of how anxious I was. Panic attacks in the shower became a new and unwelcome staple of getting ready to go out, and that in turn made me feel pretty low. Then I came back to England with deadlines hanging over me for Heidelberg, the last of which was on September 30th, with the first term of final year at Leicester starting a couple of days later. I got myself all worked up about my deadlines, getting back into the swing of Leicester life, and the fact that I was feeling rubbish, and basically things didn’t get off to the best start. It culminated in me ringing my Mum for a ‘quick’ chat and ending up sobbing down the phone about how I couldn’t keep this up any more. And my Mum, being the star that she is, told me to come home (I live in Manchester) for the weekend, we’d book a doctor’s appointment, and we’d get something figured out. My Mum absolutely saved the day really, in that she acknowledged something was wrong and set me on the path to getting it fixed. But she could only do that for me once I decided to talk to her and let her in on what was happening with me.

So that’s my personal experience- hopefully you didn’t find it too gratuitous to go on for so long. Now I’ll talk about what I’m doing in Leicester to deal with the ‘bad’ in my second part– which I’ll post tomorrow 🙂

One response to “‘Time to Talk’- Mental health Part 1”