One of the authors I studied as part of the Post war module this semester was Joe Orton. I’ve grown quite used to talking to my parents about the authors on the course and being met with a blank stare and no recognition, but I found that unexpectedly this name did have resonance for my Dad. It was unexpected because I’d never heard of Joe Orton before this term, but when I said his name my Dad instantly went “ah, yes, the fellow who wrote Loot, right?” Until then it hadn’t really registered with me how big this writer had been during his career, but once I stopped to think about it, I realised that actually he was a big deal!

Orton was born in Leicester, and lived at first in a house in the Clarendon Park area, (a popular choice for university of Leicester students to live now!) before being moved to a local council estate when he was 2. He developed an interest in acting and was accepted by the Royal Academy of Dramatic Art (RADA), so he moved to London. There he met Kenneth Halliwell, and they soon lived together as lovers. After graduating they began to write collaboratively but their work wasn’t successful, and they pottered around doing various different jobs. They seem to have enjoyed hoaxes, and the two of them set about taking library books and modifying the front cover/blurbs before returning them, usually with indecent/inappropriate images and words. They were eventually found out, and after they admitted damaging over 70 books they were sent to jail for 6 months. Orton felt that the real reason they were given such a harsh prison sentence was because they were gay, and this combined with his time in prison led him to develop his talent as a satirical/farcical playwright. 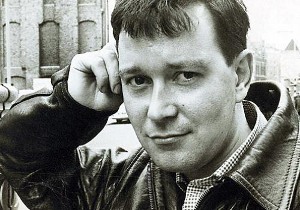 Orton’s plays garnered a lot of critical praise and also a lot of outrage, which Orton responded to by writing letters to newspapers under the pseudonym of Edna Welthorpe (an old, middle class snob), where he denounced his own works! But here’s where his success shows: his play Entertaining Mr Sloane, which we study, was performed not just in the UK but also in America, Spain, Israel and Australia , and in 1967 he was asked to write a film script about the Beatles for them whilst they were at the height of their fame. However, what he produced was so outrageous that his script was returned to him without comment. Orton was killed by Halliwell in 1967, who then committed suicide. A biography of his life was published in 1978, and was turned into a film called Prick Up Your Ears! in 1987- so as you can see, he was actually huge!

How does Orton link to Leicester?

The Cultural Quarter of Leicester, home to the Curve theatre, has a pedestrian concourse outside the theatre’s entrance called “Orton Square”.  A BBC article on the opening of the Square is available here.

But what’s even more relevant is that the University of Leicester bought a lot of Orton’s work- his letters, his original scripts etc- and they are held in the Special Collections section in the library. I’d not really known much about the Special Collections, but I went to an Orton Archive Workshop, and it was really interesting! The letters of Edna Welthorpe are actually very funny, and Orton made scrapbooks where he stuck in the negative press reviews about him, which are also great to look at, and they are the actual, real scrapbooks he made! What I had no idea about, however, is that you can actually arrange to go and see these by yourself, almost whenever you want! All you have to do is make an appointment and ask for what you would like to look at, and then voila! You get to see some really cool artefacts! And they are nowhere else, only at the University.

Should you want to find out more about the collection, you can do so here

And the Orton archive is just one of many- if you want to see the full A-Z of the collections the university has, you can do so here

So there you go, the perks of being a University of Leicester student hey! And a final little claim to fame is that this year marked the 50th anniversary celebration of Orton’s Entertaining Mr Sloane, so a special edition was printed to mark the occasion. And the introduction was written by none other than Dr Emma Parker, a lecturer for the English department at the university.

One response to “Has anyone heard of Joe Orton?”