As you can see from the other blog posts, everyone is working hard preparing for exams and getting deadlines done at the moment. The library is packed and it’s not an uncommon sight to see someone staggering out of the library with a pile of 20+ books- me included. So yes, it’s not the most fun time of the year. However, the union is doing the best it can to try and help with the inevitable stress people are under at the moment, and it’s pretty cool!

Over the last week there were 100 golden tickets to be found around campus which entitle the finder to various little treats- my friend found one and has now had a free burger at the Union Diner, result! There was also a huge inflatable assault course here Monday-Thursday which was pretty fun! It was an Australian company promoting their breakfast alternative, a carton which is the equivalent of a bowl of cereal, but really what it entailed was being given free cartons and the chance to throw yourself around on a bouncy assault course that even had a foam pit to jump into at the end. These opportunities don’t come along often enough now that we’re older, more’s the pity, so it was nice to have the chance. 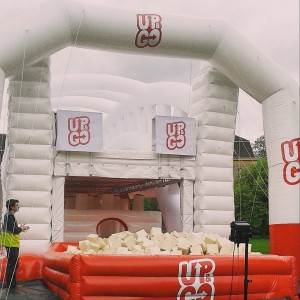 There was also a petting zoo yesterday, so on my lunch break from the library I got to go and admire the blossoming friendship between a goat and a donkey- aw! 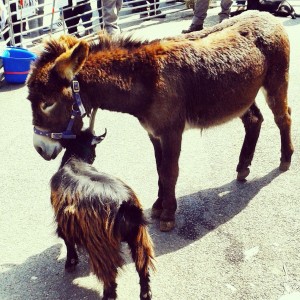 There are lots of different activities/events going on over the exam period, all aimed at helping students to de-stress. It’s a bit of fun in the middle of a not-particularly-fun part of term, and I think it’s a lovely way of the union showing how it has the interests of students at heart.