Most people seem to be in the thick of exams at the moment, me included, so I thought in this post I’d talk about happier days! I wanted to bring to your attention the fact that the English department offers the chance to go on a year abroad. I decided to go, so I spent my third year living in Heidelberg, Germany, and I can honestly say it’s one of the best decisions I ever made. Here’s why:

I had a whole extra year to practice my analysing skills, and I read a lot of texts. That’s come in really handy this year because now when a lecturer mentions an author that’s relevant sometimes I don’t have to just look blankly on, I’ve actually heard about/studied them.

It also means that the weighting of my degree is different. Instead of my grade being split 60:40 between final year and second year, my grade is now split 20:30:50. I didn’t do as well as I wanted in second year, so having it only count for 20% is a big help, and overall I’ve been a lot happier with my grades from Heidelberg and this year, so the weighting has worked in my favour. 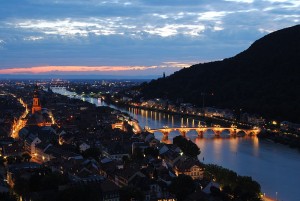 I hate the phrase “I’ve grown as a person”, but living in a different country definitely made me more self-reliant and also just more ok with putting myself into situations I’m not comfortable with, because I know it’ll probably turn out ok.

I’ve now got friends from lots of different places, so I’ve learnt a lot more about the way other people live, which is really interesting. For instance, a friend in Israel recently got married and it was so interesting to hear about/see the photos of the completely different wedding tradition they had! 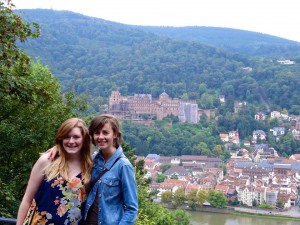 My housemate and I during our first days exploring Heidelberg

As well as learning about different cultures from international friends, I also learnt so much about Germany, a country I’d never been to before. You learn more living in a country than you ever could just on holiday, and I loved this aspect of studying abroad. For instance, who knew there could be such a thing as a croissant stuffed with sausage?! Obviously that’s not the only thing I learnt… the fact that Germany is actually on the continent meant that as well as visiting a lot of German towns, I also got to visit other countries as well. I went to France, Hungary, and Holland, and it was a lot easier/cheaper than it would have been in the UK. 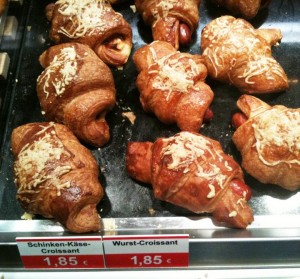 I think going on a year abroad shows a lot of good things to future employers, and when the dreaded “talk about a time…” question comes up in an interview there’s a whole wealth of experiences to be utilised now.

But also I’ve decided I want to go on and do an MA, and when I was in Heidelberg I took a Masters class each semester, so I think that’s definitely helped with my application.

Although of course I can’t speak for everyone, I am so glad I went on my year abroad and so I would highly recommend it. I think it’s a great opportunity that’s not offered everywhere, and the contacts Leicester have are at really prestigious institutions- Heidelberg is the oldest university in Germany and consistently ranks number 1 in the country.

So if you wanted to look more into it, I’ll direct you to this page, which goes into more detail about the opportunities available.

And now, back to revision!